Spectacular trailer of Masters of the Universe: Netflix Revelation 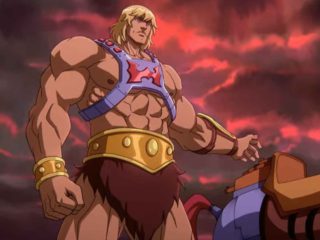 Netflix has a success in its hands thanks to the animated series Masters of the Universe: Revelation with the purest flavor of the 80s.

Kevin Smith (Mallrats, Dogma) produce la serie Masters of the Universe: Revelation from Netflix which will continue the adventures of the 80s animation show starring He-Man. We can also check how the wicked Skeletor try to take possession of the Grayskull Castle.

For those who grew up with the original series, it is sure to be a joy that they continue the story of their childhood and the new generations will find a very exciting story that they are sure to follow with as much passion as almost 40 years ago.

Here is the trailer for Masters of the Universe: Revelation.

What do you think? Leave us your comments below. What stands out the most from the trailer is undoubtedly the dubbing of Skeletor from Mark Hamill (Luke Skywalker en Star Wars).

What will the series be about?

The Serie Masters of the Universe: Revelation is set on the planet Eternia and the protagonist is Adam, the young prince, son of King Randor and Queen Marlena. The great villain is Skeletor who wants to get power. He was a great sorcerer who lost a battle against King Randor and his face was left like a skull. But even so he does not give up and will draw up malicious plans to overthrow the government of Eternia. But luckily Adam has the Sword of Power and when he yells: By the power of Grayskull! I have the power! becomes He-Man, a mighty warrior who is unrivaled. In order to face it, Skeletor intends to storm the fortress of Grayskull, since that is where the powers of Adam’s sword come from. So the war will be constant between the two sides in Eternia.

Masters of the Universe: Revelation premieres on July 23 on the Netflix streaming platform.