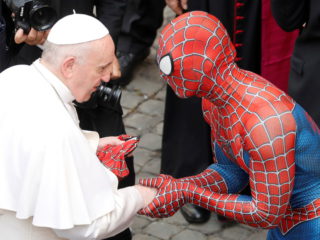 An unexpected visitor who came to the audience of Pope Francis at the Vatican on Wednesday grabbed the spotlight of the public and the media in his colorful Spider-Man costume, informs Reuters.

It was actually Matteo Villardita, 27, who, dressed from head to toe in the costume of the Spiderman character, sat between the first seats to listen to the pontiff.

Villardita is a dock worker from the Italian town of Savona and founder of Supereroi Incorsa (Superhéroes a punto), an association of volunteers that They dress up as superheroes and visit sick children in hospitals to give them a smile.

At the end of the event, the young man approached Francisco to greet him and gave him a mask of the superhero. “I asked Pope Francis to pray for the children and their families. I gave him my mask as a symbolic gesture, because it is through it that I see the pain of hospital patients every day. It was very moving, because the Pope immediately understood my mission “, commented.

For its part, the pontiff thanked the young man for the work that he performs with the children and gave him a rosary. Last year, Italian President Sergio Mattarella decorated Villardita for his “altruism and ingenious initiatives” with which he contributes to alleviating the suffering of younger patients.

Not even at the beginning of the coronavirus pandemic did Villardita interrupt his work: since then he has made more than 1,400 video calls to communicate with children.