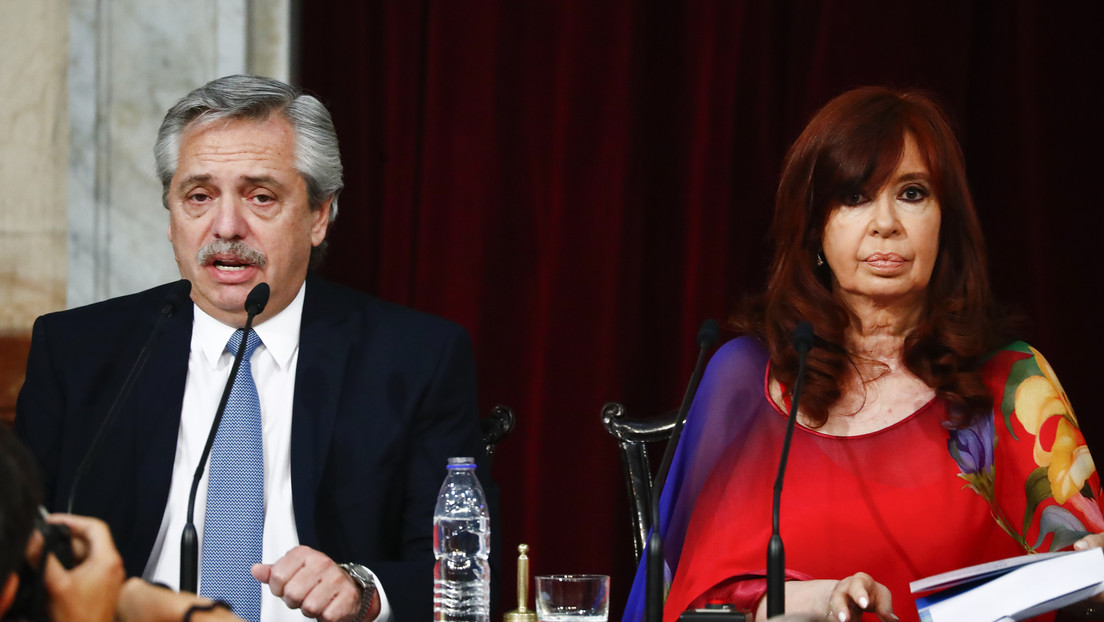 “Stop fucking”: The posters near the Argentine Congress calling for unity after the clash between Alberto Fernández and Cristina Kirchner

The walls in the vicinity of the Argentine Congress appeared plastered this Friday morning with posters calling for the unity of the Government, after the clash between President Alberto Fernández and Vice President Cristina Fernández de Kirchner.

The leaflet, which is not signed by any particular political party, begins with a “Stop fucking,” and quotes one of the maxims pronounced by Juan Domingo Perón on October 17, 1950: “First the country, then the movement, then the men”.

Posters near the National Congress after the crosses between President Alberto #Fernandez and Vice President Cristina #Kirchner“First the Homeland, then the Movements, and then the Men” pic.twitter.com/0HhgSo226p

The call comes at a time of maximum tension in the Casa Rosada, after the hard defeat suffered by Peronism in the Primary, Open, Simultaneous and Mandatory elections (PASO), held on Sunday. The disaster caused several ministers – close to Fernández de Kirchner – to put their positions to order and demand the renewal of the cabinet.

Faced with the political turbulence, the president said that he would make the modifications when he saw fit and that it would not be immediately because he was not going to act “under pressure.” However, that did not calm the criticism or the rumors of an alleged break within the government itself.

The climax of the day came on Thursday night, when the Argentine vice president released a letter in which she criticized “the lack of effectiveness in different areas of government“She defended the resignations of the ministers close to her and assured that who was” checking the government “was not Kirchnerism, but the” unprecedented electoral defeat “in the PASO.

This Friday, in an interview with The uncoveringThe president reported that the change of ministers in the Casa Rosada was already “well advanced”. “I’m going to tidy up the cabinet and end this discussion“, stressed Fernández, after ensuring that the appointments would have the full support of his vice president.

For now, the suspension of Fernández’s agenda abroad has transcended in local media, which included participation in the Summit of Latin American and Caribbean States (Celac), because the announcement of the changes in the ministries is expected in the next few hours.

But beyond the electoral situation and the need for the ruling party to reconfigure itself in the face of the general legislative elections to be held on November 14, the turning point between the president and the vice president seems to lie in the economic issue.

But beyond the electoral juncture, the turning point between the president and the vice president seems to lie in the economic issue.

Although Fernández, when he won the elections, received a country indebted to the International Monetary Fund (IMF) and with uncomplimentary economic figures inherited from Macrismo, the arrival of the pandemic aggravated the outlook and forced him to take measures to address the crisis . His policies, however, have not been fully endorsed by his vice president.

In the letter, Fernández de Kirchner assures that since last year he has maintained in private and in public that there are officials who “do not work” within the Government, and that from the Executive it was being carried out “a wrong fiscal adjustment policy“, which negatively impacted the economy and” undoubtedly “would have electoral consequences.

“I did not say it once … I got tired of saying it … and not only to the President of the Nation. The answer was always that it was not like that, that I was wrong and that, according to the polls, we were going to win” very well “the elections, “said the vice president, who considered that in the face of the overwhelming electoral defeat, the resignations of the ministers are required to” facilitate the president’s renewal of his government. “

President @alferdez raised before @JoeBiden better financing conditions to face the climate crisis at the Major Economies Forum on Energy and Climate (MEF).https://t.co/DMHf4ew4C7pic.twitter.com/XJItUXMOHe

Fernández, for his part, remains in line with the economic priorities of his Government: the economic crisis left by the pandemic and the restructuring of the debt with the IMF. Today, during his participation At the Forum of the Main Economies on Energy and Climate (MEF, for its acronym in English), the president reiterated his criticism of the Fund for having granted the loan of 57,000 million dollars to Argentina during the administration of Mauricio Macri, reiterated that the Credit was “unsustainable” and he proposed to start applying other payment instruments that contemplate the debt swap for climate.

“There is no more room for irresponsible adjustments, impossible to comply, than damage the credibility of both of us, as leaders, as those who grant unrealistic assistance, “said the president, after ensuring that the new restructuring agreement reached with the IMF will be based on the principles of sustainability, social inclusion and transparency. This intervention was the only one of the agenda that the president had this Friday.

Without detracting from the struggle between Peronism on how the economy should be addressed, Cristina Fernández’s letter showed that the cracks have a background beyond economic disagreements.

The accusations of the vice president were directly against the presidential spokesman Juan Pablo Biondi, whom he accused of “do operations in off“to harm her and her political movement. For this reason, she revealed that she had personally communicated with the Minister of Economy, Martín Guzmán, to clarify that she had not lost her resignation, as it was” falsely disclosed “in the media.

“Why am I counting this? Because I will no longer tolerate press operations that from the presidential environment Through his spokesman they are made about me and about our political space, “he settled.

Although the crossing of accusations ceased since the publication of the explosive letter from Cristina Fernández, the political tension is at the maximum with the constant leaking of audios of officials and awaiting new appointments. Macrismo, for now, is silent with its triumph on its back and Peronism, even in the walls, shouts to demand that the dirty laundry be washed at home.