Stranded: airlines warn that the problem will deepen despite the increase in the revenue quota 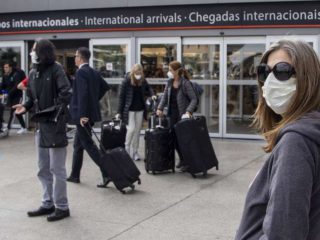 Far from being solved, the problem of stranded abroad it could intensify in the coming days. This was warned by the airlines, which classified as “insufficient” the government’s decision to increase the revenue quota as of Monday.

The National Civil Aviation Administration (ANAC) held this Saturday at 10:30 an informative meeting via Zoom with I SWEAR, the Chamber of Air Companies of Argentina. As pointed out to TN.com.ar One of those present at the meeting, of which the International Air Transport Association (IATA) was also part, the regulatory entity assured that “there would be no Special Repatriation Flights.”

// The others stranded: the odyssey of citizens who live abroad and cannot leave Argentina

This Friday, the national Executive expanded through a new Administrative Decision (DA) the daily quota of Argentine passengers or residents who may enter the country by air. The measure will be implemented according to a gradual scheme that will govern for the next four weeks.

Entry will also be allowed from Uruguay of two weekly passenger ships, with a capacity of up to 50 percent.

However, from the Chamber of Air Companies they warned that the measure is far from reversing the problem of stranded people. On the contrary, as they pointed out, the number of daily departures clearly exceeds that of arrivals. And so every 24 hours some 1400 travelers who do not know when they will be able to return.

“We convey the concern that the problem of stranded would worsen as it they add passengers day by day “, pointed to Infobae a representative of JURCA at the meeting. “We make it clear that the daily passenger quotas assigned in this Administrative Decision are insufficient for the sustainability of our industry,” he remarked.

For its part, the head of the ANAC, Paola Tamburelli, said today that “the only objective of controlling entry from abroad is to take care of the health situation.” And in line with the information that emerged from the meeting this morning, he clarified that the new administrative decision that increased the quotas per week to return to the country “does not speak of special flights.”

“It is a satisfaction that the quota to return to the country is increased,” the official said in statements to Continental radio, while ruling out that the first measure to reduce the quota to 600 people, driven by the purpose of delaying the arrival of the Delta variant of coronavirus, has been “untimely.”

// The Government made more flexible the number of passengers that can enter Argentina: how many can enter this week and how the scheme continues

“The administrative decision does not speak of special flights”

“The only objective that exists in the regulation is to take care of the health situation”Tamburelli insisted. And he elaborated: “Every 15 days epidemiological evaluations are made and decisions are made about flights. It has to do with the entry of people who could eventually be infected and, thus, now enter this new variant -Delta- that still does not have community circulation in Argentina ”.

He also explained: “Each measure is not unique, but is a puzzle and has to do with a reduction in passengers that allows a sanitary control at the airport that enters where an antigen test is carried out; then guarantee to transfer him to a place with all the protocols so that he can be isolated; and finally the control of compliance with the quarantine ”.

Regarding the consequences of people not complying with the expected isolation, Tamburelli stated that “the circulation of an infected person who has not yet been detected, ends with a series of infections to many people, which is precisely what we want to avoid ”.

// The Government published the DNU with the new restrictions: what it says about the passenger quota and what will be the sanctions for those who do not comply with isolation

“The special flights occurred when there was an urgent need to repatriate because there were stranded in the terminals because of the companies. Once the companies adjusted their schedules, they adjusted to these quotas ”, he specified.