Strong sanction for the Algerian judoka who refused to fight with an Israeli in the Olympic Games: his career is over 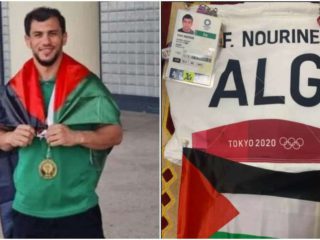 The International Judo Federation (IJF) suspended Algerian Fethi Nourine for 10 years for withdrawing from the recent Tokyo 2020 Olympics to avoid fighting an Israeli.

The IJF It also suspended Nourine’s coach, Amar Benikhlef, for his decision recorded on July 23 in the competition of the category up to 73 kilograms of the Olympic Games concluded on August 8, the ANSA agency reported.

Nourine had expressed that his support for the Palestinian cause prevented him from fighting with the Israeli Tohar Butbul, whom he was to face on July 26 as determined.

After a temporary sanction for the judoka and his coach, on July 24 the IJF appointed an investigation commission, which determined the suspensions for Benikhlef and Nourine, who had already withdrawn from the Tokyo 2019 World Cup due to a similar situation.

It is evident that Nourine and Benikhlef, it reads in a statement from the entity, “They used the Olympic Games as a platform for protest and promotion of political and religious propaganda, which is a violation of the IJF statutes and the Olympic Charter ”.

“Therefore, in this case no other sanction can be imposed other than a severe suspension,” which will last until July 23, 2031, although Nourine and Benikhlef may appeal to the Court of Arbitration for Sport (CAS).

The world governing body for judo has been steadfast in its anti-discrimination policies and in recent years has shown strong support for Israel’s right to compete.

“We have worked hard to qualify for the Games, but the Palestinian cause is bigger than all this”, Declared the athlete to the television of his country, when he stated that he would not continue in the competition. He also released a derogatory comment that did not go unnoticed by the authorities: “I wouldn’t get my hands dirty,” he declared.

It is not the first time that Fethi Nourine acts in this way since for the same reason, the Algerian had dropped from the World Cup in Japan two years ago when he also had Butbul ahead in the competition table.

“We were not lucky with the draw. Nourine fell to the Israeli in the second round and that is the reason for his withdrawal, “said Algeria national coach Amar Ben Yekhlef.

The conflict between Israeli and Islamic athletes in judo also had its manifestation in Rio 2016, when the Egyptian El Shahaby refused after his defeat to shake the hand of the Israeli Sasson, in the -100 kg division.