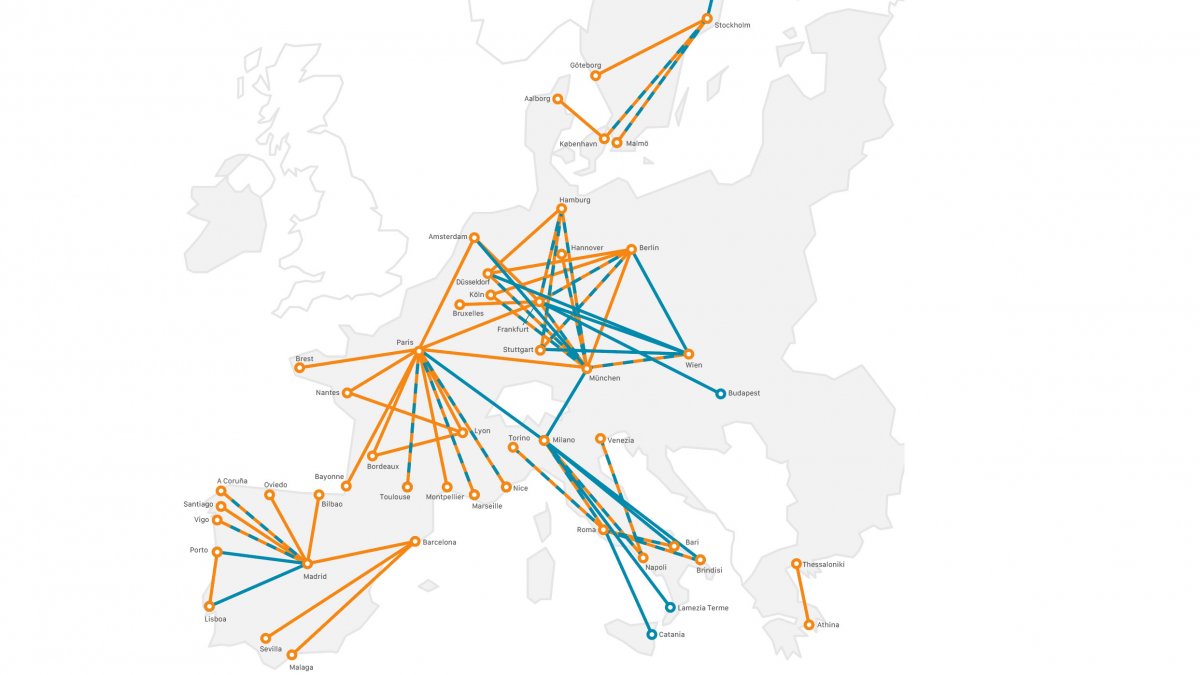 Study: Important short-flight routes can be replaced by train journeys under 6 hours

34 percent of the 150 busiest flight routes within the EU have a rail link that takes less than six hours. This is the result of a study by the think tank OBC Transeuropa for Greenpeace. Around a quarter of the routes that last more than six hours are served by direct night trains or they last less than 12 hours. Beyond the EU borders, similar proportions apply to the 250 busiest air routes in Europe, which at least theoretically offer a rail alternative.

For the study “Train alternatives to short-haul flights in Europe” (PDF), OBC processed data from the European statistical office Eurostat on air traffic on routes less than 1500 km in length in 2019, i.e. before the global outbreak of the coronavirus. They include flights within the EU as well as connections between the EU and countries such as Montenegro, North Macedonia, Norway, Serbia, Switzerland and Great Britain. Eurostat does not mark feeder and connecting flights.

If the routes considered were no longer flown, but driven on, 54 million fewer people would travel by plane every year, according to the study. It could produce 3.5 million tons of CO2 can be saved. This would roughly correspond to the CO2-Emissions from the annual energy consumption of 2.3 million households.

In 2019, for example, 1.48 million passengers flew between Munich and Düsseldorf. OBC estimates that the train journey between the two cities takes 5 hours. There were 2.5 million people in the air between Madrid and Barcelona; the train journey takes 2.5 hours. With 3.2 million passengers, OBC shows the Paris-Toulouse connection as the most frequented European connection. The distance can be covered in 4:22 hours by train.

For 84 percent of the flight connections considered, it is possible to travel the same route within a day by train, and this also applies to longer routes such as Amsterdam-Madrid, Rome-Brussels or Paris-Warsaw, writes OBC. However, there is also room for improvement. The direct train connection between Vienna and Budapest takes 19 hours, as the train travels an average of 55 km / h on this route. Train travelers would have to change four times between Milan and Vienna and from Amsterdam to Copenhagen.

Rail traffic can compete better with airplanes if not only the infrastructure is improved, but also the timetables are better coordinated and more trains are used, says the think tank. Some railway lines and junctions are particularly important. The Paris-Barcelona route is mentioned in the study. Before the pandemic, there were three direct trains a day between the two cities, which were reduced to two as a result of the pandemic. In addition, there are no direct night trains. In some cases, on the way from Italy or Germany to Spain, it is necessary to travel via Paris because the railway connections in the Alps are poorly served. Direct or fast connections to large airports are too rare to make feeder flights unnecessary.