Study: Wind farms in the North Sea mutually take away the wind 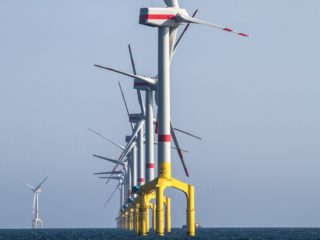 Offshore wind farms can slow each other down over a distance of an average of 35 to 40 kilometers. In stable weather conditions with little turbulence, especially in March and April, the braking effect can even reach 100 kilometers.

That is the result of a study by Helmholtz Center “Hereon”who are now in Nature Scientific Reports has appeared. In stable weather conditions with little turbulence, especially in March and April, the braking effect can even reach 100 kilometers. In stormy times – especially in November and December – the atmosphere is so mixed that, according to the Helmholtz Center, the wind farm effect is hardly significant.

“Depending on the size of a wind farm, the annual average wind deficit can be 2 to 2.5 meters per second, which corresponds to a loss of power of 1 to 2 kilowatt seconds,” says Hereon. “The output of a neighboring wind farm can thus be reduced by 20 to 25 percent.”

In order to simulate the wind in detail, Naveed Akhtar, expert for regional climate modeling, and his team have fed the computer model COSMO-CLM with data from the wind farm planning for the North Sea from 2015, among other things. This also includes wind farms that have not yet been built. With this data, the researchers simulated the wind conditions for the period from 2008 to 2017 and successfully compared them with the real measured values.

The special thing about the work is that for the first time a full ten-year period has been calculated for the entire North Sea. “Conventional flow models for analyzing wind farms have a very high spatial resolution, but only look at a wind field over short periods of time,” says Akhtar. “In addition, it cannot be used to determine how a wind farm changes the air flow over a large area.”

The results have consequences for the technical and political planning of offshore wind farms. “We have identified a conflict of objectives when clustering wind farms,” ​​says the paper. Merging parks would reduce the investment costs for the infrastructure, for example for the power connection, but at the same time also lead to lower yields.

Bigger effects in the future

Even today, offshore electricity production would have a “substantial influence on the atmospheric conditions there”. These effects would increase in the future with more and larger turbines.

Since wind is one of the central factors for the “productivity and structure of ecosystems”, it also has an impact on marine animals. In addition, the wind also influences the heat flows and thus the local climate. The researchers want to investigate this further in the future.

The researchers concluded that wind in the North Sea could be viewed as a “limited resource”. With the current expansion plans, the limits of the exploitation of this resource have been reached locally. They demand “better planning and optimization of the locations”.