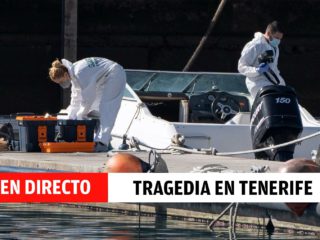 The oceanographic vessel ‘Ángeles Alvariño’ continues with the tracking work in the area where little Olivia was found, to try to locate her one-year-old sister Anna. The autopsy of little Olivia, found last Thursday at a depth of 1,000 meters, reveals that the girl died of acute pulmonary edema. The search for her sister Anna as well as her father Tomás Gimeno were interrupted this Saturday due to technical problems on the ship.

09:13 Letter from Beatriz: «Olivia told me that my problem was that I loved her too much and she smiled»

Beatriz Zimmerman, mother of Anna and Olivia, girls allegedly murdered by their father in Tenerife, has sent a letter to public opinion to be disseminated. In it, he calls for a tightening of the legislation on violence against minors. He also claims to miss the “day to day … the gestures of combing them” and wants his death not to be in vain and that at least “it serves to create greater awareness about the love we give to our children, in valuing it and when we are with they do not have the head in other matters but in them. They need us and adore us.

Beatriz begins by writing “with all the pain in my soul, I want to write you a thank you letter” and addresses all public opinion: “To all of you who have been in hearts and prayers with them and with me accompanying them every day since They disappeared, offering all their love and help so that it would have a happy ending. Unfortunately it was not like that, suffering in pain the most monstrous act that a person can commit: killing his own innocent children.

09:00 The judge dictates an international order against Tomás Gimeno for killing his daughters

The magistrate of the Court of First Instance and Instruction number 3 of Güímar has annulled the international order for the arrest of Tomás Gimeno for the crime of abduction of his daughters Anna and Olivia. Instead, it has agreed to another international order for the alleged commission of two aggravated crimes of homicide and one against moral integrity in the field of gender violence.

The investigating judge of the case has also declared the loss of jurisdiction of the Court of Güímar in favor of the Court of Violence against Women of Santa Cruz de Tenerife, where Ana and Olivia’s mother is domiciled.

08:30 The ‘Ángeles Alvariño’ will resume the search after suffering a breakdown

The oceanographic vessel ‘Ángeles Alvariño’, based in Vigo, has remained since Saturday in the port of Santa Cruz de Tenerife after suffering a breakdown, after 13 consecutive days of tracking in the area where last Thursday the lifeless body of Olivia and where her sister Anna and her father Tomás Gimeno are sought.

The ship of the Spanish Institute of Oceanography (IEO), equipped with a side scan radar and an underwater robot, will continue with the tracking work this Monday to try to find Anna and Tomás once these technical problems are solved.