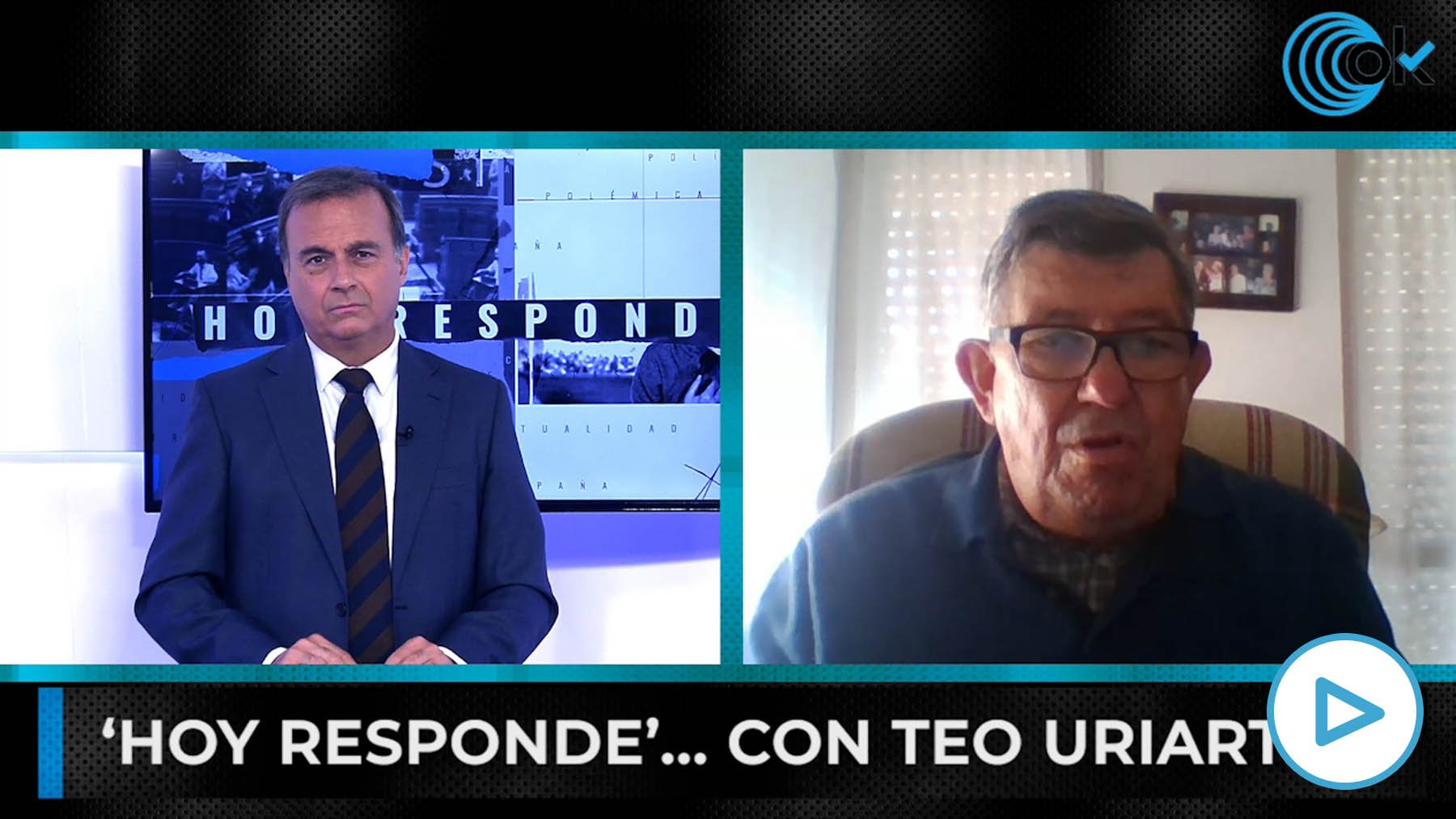 Teo Uriarte: “Sánchez legitimizes ETA by despising the blood of the victims and making a pact with Otegi”

Eduardo Uriarte Romero, ‘Teo Uriarte’, as his fellow ETA members called him, considers himself -with regret- “one of the monster’s fathers.” He entered ETA in the early 1960s shortly after arriving from Seville with his family. “I came in almost wearing shorts,” he explains, “because my deskmate had joined ETA and because I was bored. Franco seemed very boring to me ». He learned to use weapons, although he never used them. Arrested in Cantabria in 69 was one of the 16 ETA members of the Burgos Process. He was sentenced to two death sentences, but Franco finally commuted them due to international pressure.

Teo Uriarte was in jail until the amnesty of 1977 and, when he left, already in democracy, he founded, together with Mario Onaindía, Euskadiko Ezkerra, which years later would end up merged with the Basque PSOE, which, disappointed, he finally left. He was a councilor in Bilbao and a regional deputy. They had to escort him until 2013 (after the end of the attacks) because ETA had him in their sights.

Teo Uriarte knows well the guts of ETA and the dark world of Basque nationalism. He was a clandestine muñidor and a direct witness to the dissolution of ETA politico-military in 1982 to try to end terrorism after Franco died. In the interview with HOY RESPONDE by OKDIARIO Uriarte tells how Xabier Arzalluz, meanwhile, traveled to France “in an official car” to suggest “Jesuitically” to the ETA leaders that they should not dissolve and continue killing.

By then, Arnaldo Otegi was already in jail as a member of ETA pm. Uriarte recalls that Otegi – today a preferred partner of the Pedro Sánchez government and who negotiates prisoners for budgets – could have left him in 1982 with the “real” dissolution of the poli-milis (with royal act, request for forgiveness and surrender of weapons ). But Otegi preferred to continue with terrorism in the military ETA: «Otegi did not want to leave and continued with the military. And with the 750 or 800 dead who came later today he shows up to do politics and says that thanks to them he can speak to us. “It is an aberration!” He exclaims, “and the one who manages to camouflage this aberration is the socialist government.”

He believes that Arnaldo Otegi does not apologize or condemn ETA “because genetically he cannot do it. They will never do it because condemnation is a taboo word for them and if they did it would be their end and their decomposition. But Uriarte unloads the responsibility in the PSOE of Zapatero and Sánchez. He openly says that when an ETA already defeated by the police had to be finished off in 2005, «Zapatero resurrected it [conscientemente] with its process of dialogue to include ETA and Batasuna in one of the pillars of its new political project for Spain inspired by Latin American populisms and Chavismo ».

He remembers the pressure from the Zapatero government and from socialists like Eduardo Madina to the Constitutional Court to annul the illegalization of Bildu, which was ruled by the Supreme Court. It was about putting ETA’s successors into politics to form a new left-wing majority with the PSOE regardless of the terrorists’ criminal past. Years later, without Mariano Rajoy doing anything to prevent it, Pedro Sánchez has completed Zapatero’s project and has consummated that new majority with Bildu and ERC. The plan of the PSOE and ETA has been fulfilled.

Teo Uriarte describes the pact of Sánchez and the PSOE with Otegi and Bildu as “unworthy, irresponsible, frivolous and suicidal, which leads to the legitimation of ETA, the decomposition of Spain and possibly – he says – a serious civil confrontation. There is no political system that can admit the collaboration of the government of a nation with those who have been terrorists and have not rejected terrorism. And he laments: «All those deaths and all that blood has served, in the end, for Bildu, the political arm of ETA, to be the second political force in the Basque Country and for the PSOE to negotiate with Bildu the government of Navarre and in the Congress of Deputies. In the end, the sacrifice and death of the victims has served to prove them right. The President of the Government and the PSOE are giving them the political reason and telling them… Gentlemen… you killed us so that now we can constitute a bloc together and that you are in politics. All those deaths and all that blood of the victims! … This use of death by the PSOE is something criminal. To Spanish socialism [desde Zapatero] He doesn’t give a damn who he makes alliances with or what behaviors they have.

Teo Uriarte tells that Zapatero and the PSOE did not want to totally defeat ETA to benefit politically from Bildu: “If ETA finally ceases – as Ione Belarra says – it is because it was absolutely annihilated by the Police and, above all, the Civil Guard. Because ETA wanted to continue. That statement from ten years ago could have been a victory if he stayed there, but the PSOE was not interested in him staying there and gave luster and support to what came later, which was the political and cultural hegemony of ETA and its successors in the Basque country”. For Teo Uriarte, given the electoral rise of Bildu in the Basque Country, Zapatero’s political calculation will end badly and the PSOE “will end up being Bildu’s political altar boy.” He believes, without hesitation, that for ETA it is a “huge victory” that ten years after that statement the Government of Spain depends on Bildu: “Letting them do and argue after that statement meant the real continuation of ETA even if it left its arms.”

Teo Uriarte says that they are so grown that “we live the exaltation of ETA, not only in the tributes, but in the Congress itself where those who, in their day, pointed out to us as targets and threatened us.” Remember that those were times when if Egin and later Gara (where Pablo Iglesias collaborates today) quoted you in their opinion articles, you already knew that ETA was going for you.

Regarding the approaches and tributes to ETA members, Teo Uriarte says that “neither the Government nor the PNV want to prohibit them, although the Victims Law requires them. Joseba Pagazaurtundúa’s mother already told Patxi López [el día que le llamó traidor a gritos]: that certain things would freeze our hearts ».

Uriarte describes the surrealism in which the Basque Country has lived for decades, remembering things such as “the day ETA tried to kill the Basque councilor José Ramón Recalde, in 2000. A spontaneous demonstration of protest was mounted that crossed paths with an authorized from Herri Batasuna. Well then, the Ertzaintza said that it had to charge against those who were protesting against the ETA attack because the Batasuna attack was authorized. This is the country we live in.

Teo Uriarte -who was in ETA and saw it become the monster that it was- says that “the victims are the heroes of our democracy and if this were a true democracy they would be on the altar of the country.” And he ends: “But in a sincere way and not in a used way as is normally done now.” Uriarte sees a paripé in the displays of pain and solidarity of socialists and nationalists with the victims: «Surely there will be an act in the Vitoria Memorial soon … and Minister Marlaska will come and say very nice things … but, in the meantime, they agree Budgets are agreed by the government of Navarra, agree in certain municipalities with Bildu and give Otegi the newscast to say what he wants just on the day of the anniversary of that ETA statement ».