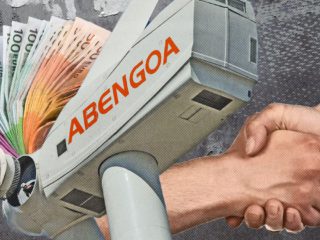 While the process of awarding Abenewco1, the subsidiary to which the assets and businesses of Abengoa have been transferred, is still waiting for the SEPI to approve the rescue of 249 million euros that the Sevillian engineering management has requested, one of the funds that has shown interest , Terramar, which will have 70% of the company if it is finally the winner of this process, is already probing international funds to sell its shareholding package.

According to sources in the sector, “Terramar is contacting different funds to probe them and offer them their shares, be it 70% or a part to one fund and another part to another.” “But the problem is that the funds are reluctant to enter due to the legal problems that the company has. The last search in Seville carried out by the police is not a good letter of introduction “, they explain.

“The funds do not invest their money where they smell a problem, of course. The same is happening to the minority platform, who are looking for partners among the funds but the judicial noise and the bureaucracy torpedo the operation, “these sources insist.

The Terramar fund has already announced an offer of 200 million euros for Abenewco1, conditional on the SEPI providing the 249 million euros requested and the bank accepting the refinancing of the debt. After this process, the North American fund would have 70% of the capital and would be the first shareholder.

The problem is that the offer of Terramar, a small investment fund, does not have the support of an industrial partner, as SEPI wants. The Government wants an industry to take over the historic Andalusian company to give continuity to the project, similar to how it has done in Hard Felguera -the injection of funds is conditional on finding an industrial partner-.

The minority platform, which accounts for 21.7% of Abengoa’s capital, is very critical of Terramar’s offer, whom they consider to be an opportunistic fund that only wants to get a slice of this operation and, if they finally win the process, sell to chunks the company. Banking sources have indicated to this newspaper that Terramar has made a commitment with the company not to chop up the company, as this newspaper published.

While Terramar makes its movements in Abengoa, the other stakeholders, the minority, led by Clemente Fernandez, they are moving tab as well. They have requested an extraordinary meeting, on which the bankruptcy administrator has to decide, and a shareholder has requested in the commercial register of Seville the convening of an ordinary meeting, which has not been held since 2019. After hearing Abengoa’s management, now he has to decide the record on that call.

As is well known, the intention of the minorities is to take advantage of that Board, ordinary or extraordinary, to dismiss the current president, Juan Pablo López Bravo, and raise Fernández to the presidency. From there, the minorities will take power, will have unlimited access to the financial situation of the company and will sit down to negotiate with the creditor banks.