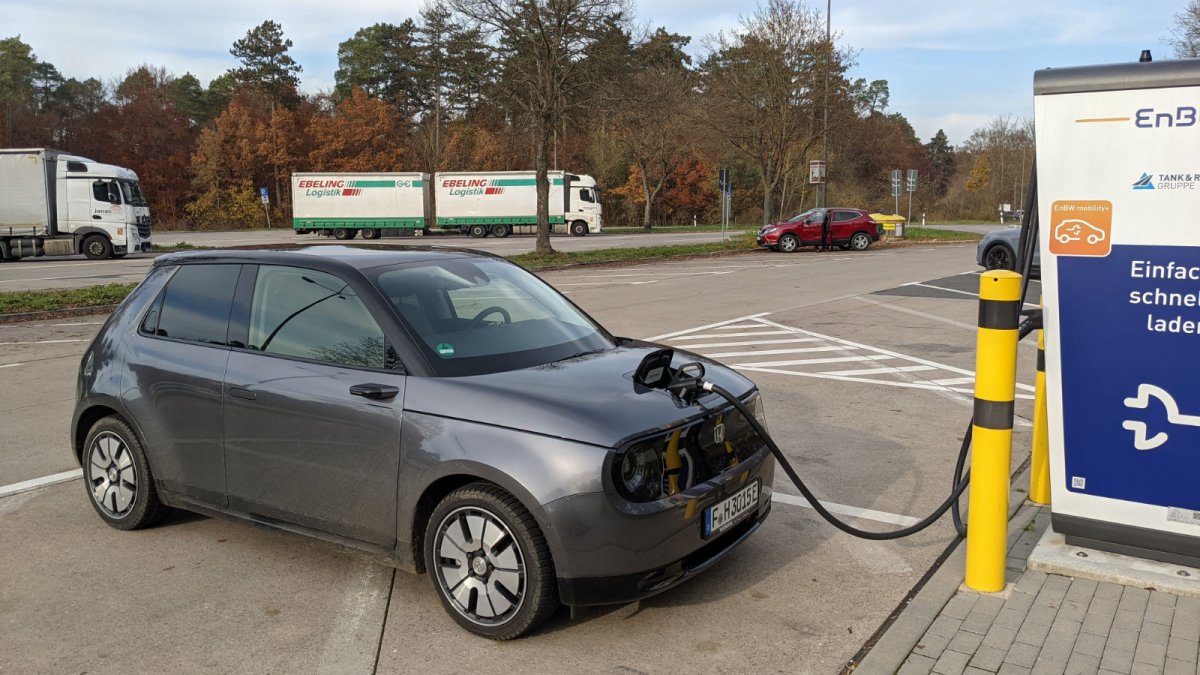 Test of the electric car Honda e: Cool instead of functional

“That’s cool!” Most people exclaim when they see the interior of the Honda e. A bar of five screens extends over a lowboard made of imitation wood. Including a flat base with stylish (retractable cup holder) or practical (Schuko socket with at least 1500 watts of power) accessories in chic Japanese simplicity. Instead of exterior mirrors: cameras with screens.

The car drives great on top of that. The balanced chassis is fun, and despite the practical engine room at the front under the hood instead of Frunk, Honda has fortunately done a rear-wheel drive. With this, the e pushes out of bends and scores in the city with a lot of steering angle, which leads to a crisp, small turning circle of 9.2 meters. Honda rounds off the package with a spacey design that cites Honda’s small cars of the 1960s and 1970s, such as the cute N600. You can even find lines from Honda’s 2010 EV-N concept because it did the same thing.

All of this costs money: Honda wants to see at least 33,850 euros – a lot of ash for a car that does not drive 200 km at a time. The target group could, however, be similar to that of a Mini Cooper SE or a Fiat 500 Abarth, so the Honda e is applying as the cool second car of the household. What bothers me, however, is that Honda has really built very close to the concept car. Many of the e’s systems work quite nicely when demonstrating and often not at all in everyday life.

Technology, infotainment and the Geneva Conventions

The screen behind the steering wheel belongs to the speedometer displays. The two screens in the middle and on the right belong to infotainment / telematics. The most used system as always: navigation. Fortunately, Honda had Garmin make this system. Garmin is the company that always tries to lead me backwards in one-way streets, but at least they can do their job better than Honda themselves. Honda’s own satnavs were always less a case for usability discussions than a case for the Geneva Conventions.

However, there is a lack of system integration here. Example of the online voice assistant: “Navigate me to XY!” -> System says OK. But nothing happens. Sometimes the Assi claims he doesn’t understand me. However, since it shows what he understands, I often want to accuse him of lying. He completely understands what I said. He just has no idea what to do then, and that is not due to the speech recognition (the manufacturers all buy it), but to the user guidance, which the manufacturers unfortunately do themselves. Sometimes the Assi answers in a curious mix of Denglish, which completes the concept car impression.

I don’t want to spend long with infotainment, it’s simply a bit gritty. In the end you somehow get along with it (see Stellantis). But otherwise there is a lack of functionality in many corners and ends. The heating output of the steering wheel and windshield heating is so tight that both could have been left out. The steering wheel only gets slightly warm in places, in spurts, as if an old chain smoker were shaking hands with you on your deathbed. Warming cold fingers is different. The heating disk heats so weakly that Honda always supports with a fan, which then does the main work. These are clearly incorrect dimensions.