The basic food basket increased 22.7% in the first semester and a typical family needed $ 66,488 in June to avoid being poor 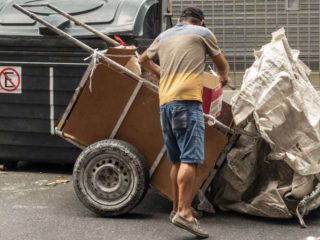 The amount of the total basic basket per person reached $ 21,517 monthly in June, which meant a 3.2% increase in the month. This way, a family of four needed $ 66,488 so as not to fall below the line poverty. The data comes from the report published this Thursday by the Indec.

For its part, basic food basket, which determines the line of indigence, amounted to $ 9195 per person. In this way, he recorded a 3.6% increase in the sixth month of 2021. Consequently, a typical family required $ 28,414 so as not to be destitute. That figure rises to $ 29,885 in the case of households consisting of five people.

The monthly increase in the total basic basket was in line with the inflation June, which stood at 3.2%, while the increase in food basket surpassed it by 0.4 percentage points. In the accumulated in the first semester, the total basket increased 22.7% and the food one, 25.3%. Those figures compare with the 25.3% rise shown by the general price level between January and June.

In comparison against June of last year there was an acceleration in the income needed to avoid falling into poverty and destitution. The basic food basket rose 57.6% in the last 12 months and showed five year-on-year increases in a row. For its part, total basic basket advanced 51.8% and registered the seventh consecutive increase. In both cases, the indicators jumped above the accumulated inflation in the same period, which came to 50,2%.

In the last year, increases in the price of some food they reached over 50%. This issue is among the main official concerns ahead of the elections.

Although in the Government they argue that part of the increases is explained by the rise in international pricesIn recent months, various initiatives have been launched to try to contain commodity values. Among them is the agreement to maintain popular meat prices and the launch of specific baskets such as Care Prices and Super Close.

These pricing programs are complemented by the concrete food assistance to the most vulnerable sectors. According to the Observatory of Social Debt of Argentina of the UCA, a 45,9% of Argentine children depend on some type of direct or indirect subsidy. Along these lines, the Government extended the Alimentar Card to minors up to 14 years of age.