The blue dollar rises for the seventh consecutive day and the gap already exceeds 90%: what does the Government think 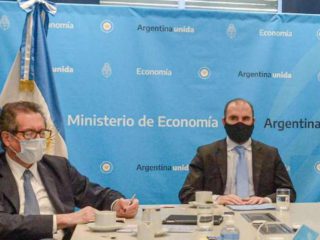 The blue dollar go back up this Thursday and is sold to $ 184 for in the Buenos Aires City. Thus, it touches a new maximum value since the end of October, which analysts believe is a new floor. Climbing the ticket accumulate $ 16 so far this month, of which $ 8 was given in the last seven days.

The new year high for the parallel quote leads to the gap with the wholesaler to touch the 91% for the first time since last January. The advance of the blue began at the end of June and led the Casa Rosada to reinforce the intervention to contain a rise in free prices.

// How far can the dollar go after the election?

From the Casa Rosada they have been insisting that the exchange rate is at reasonable levels and that there will be no surprises either before or after the legislative elections in November. Even if they do admit and foresee that exchange rate noise be a constant pre-election.

The behavior of the dollar blue was one of the axes of the weekly meeting of the economic cabinet, held this Wednesday and which was commanded by the deputy chief of staff, Cecilia Todesca Bocco. With the Minister of Economy, Martin Guzman, and the head of the Central Bank, Miguel Pesce, monitored the parallel when it rose to $ 183 and how the financiers increase in the first tranche of the wheel above the implicit ceiling and then position around $ 166.

// Blue dollar versus fixed term in pesos: how they performed in the last month

The diagnosis is that the tourniquet to the dollar “Counted with settlement” is giving the expected results (that is, reducing the daily oscillations on the official screens) and that the long position on the part of the Central Bank (BCRA) did not stop. In that sense, international reserves this week exceeded US $ 43,000 million for the first time in eleven months.

“The Central has an absolute ‘back’ to guarantee exchange rate stability. There is no prospect of any ‘cimbronazo’ before or after the elections ”, assured the head of the AFIP, Mercedes Marcó del Pont, who commanded the monetary authority during the government of Cristina Kirchner.

The economist refers to the firepower that the Central Bank accumulated in recent months. Since December, the agency bought more than US $ 7.3 billion in the foreign exchange market. To this will be added the US $ 4,350 million that will arrive in August for the issuance of Special Drawing Rights of the IMF, which will strengthen reserves.

The dollars purchased serve the entity to continue to intervene in the bond market, in such a way as to control the quotations of the cash with settlement and the Mep dollar, which function as a reference for the parallel banknote. The government hopes that this financial “back” will help it weather the exchange rate storm and arrive relatively calmly for the legislative elections.