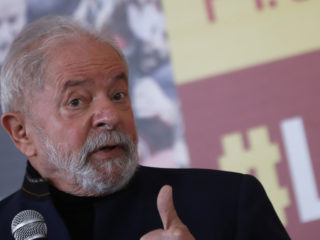 “The Federal Court of Sao Paulo accepted the request that we presented in defense of the former President of the Republic Luiz Inácio Lula da Silva to determine the blocking of another unfounded investigation related to his name”, they say his lawyers in a statement published by the ex-president’s press office.

In that investigation, Lula was accused of international influence peddling to incite Costa Rican leaders to close contracts with the Brazilian construction company OAS.

THEY FALL ONE BY ONE | Last Friday, former president Lula obtained another victory in court, against the lawfare that prevented him from running for elections in 2018. Read more: https://t.co/qD2kgU6C0J#teamLula

The events date back to 2011, when Lula had already left the Presidency of Brazil. The investigation was opened, according to his lawyers, based on a testimony presented by the former president of OAS Léo Pinheiro.

Pinheiro said that Lula had been hired by OAS to give a conference in Costa Rica, with the aim of influencing the leaders of that country to do business with the construction company.

However, according to the lawyers’ statement, Pinheiro’s version was not confirmed by any of the people heard by the Federal Police and, in new testimony, “The executive himself denied any payment of undue advantage to former President Lula”.

Therefore, the judge determined that there are not enough elements to continue the investigation against the former president and that, in addition, the crimes charged against Lula have already prescribed.

The investigation also included Pinheiro himself, the former OAS executive Augusto Uzeda and the former president of the Lula Institute Paulo Okamoto, for whom the case was also closed.

According to the lawyers, this is Lula’s 19th victory before the Brazilian Justice, including the annulment, in the last year, of the two convictions against him for alleged corruption.

“Of the avalanche of lawsuits filed against Lula, only one of them remains open,” they mention in the statement, and it is the related to the purchase of Swedish fighter jets.

The former president is accused of using his influence so that the government of Dilma Rousseff (2011-2016), his successor in the Presidency, attributed to the Swedish company Saab a tender for the purchase of 36 Gripen model fighter planes.

“We hope that the case of former President Lula will be duly analyzed by the Justice System, by the Academy and by Civil Society, to avoid the practice of lawfare against any person or company in our country, given the harmful effects derived from its practice, which can put democracy itself at risk “, say its lawyers, They point out that they have already filed an appeal for this investigation to be closed, considering that it “was constructed” by the Lava Jato prosecutors based on “unfounded” accusations and “aware that Lula had not committed any illegal act.”