The British Royal Navy shares the vision of its fleet of the future: stratospheric drones and stealth autonomous submarines (PHOTOS) 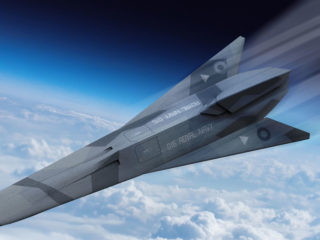 The British Royal Navy shared a series of sketches details of futuristic aircraft and vessels as part of your vision of developing your fleet to the next 50 years.

The ambitious designs were developed by young engineers in the framework of an initiative organized by the United Kingdom Naval Engineering Science and Technology forum (UKNEST) and comprise four proposals that combine advanced technologies of low detectability, intelligence artificial, renewable energy and unmanned vehicles.

The first of these consists of a drone station suspended from a large solar powered helium balloon that would float in the stratosphere terrestrial for years, patrolling the sky autonomously.

It’s not just boats the future concepts looked at. One of the designs sees drones launch from a base station in the stratosphere. With the ability to freefall, glide and then submerge underwater, they could be used in operations all over the world.https://t.co/dP1LZEBGqRpic.twitter.com/AmZmr0ce61

The station will house fast attack drones capable of plummeting to supersonic speeds to then unfold its wings, acquiring the form of conventional warplanes and thus achieving greater control and leveling. Ships can glide above or just below the surface of the water for greater stealth, before hitting an enemy target.

Another of the sketches represents an underwater platform, whose design was inspired by some families of corals known as ‘brain coral’, due to their similarity to this organ.

And finally, logistics is key to the #RoyalNavy. As part of the future autonomous fleet, hexagonal units have been designed which could carry stores like food or munitions. Launched from an underwater vessel, they can provide supplies to any ship.https://t.co/dP1LZEBGqRpic.twitter.com/o8bQDn3joP

It will be responsible for releasing hexagonal-shaped mobile devices underwater that will carry various payloads, such as weapons, ammunition, humanitarian aid, surveillance elements and even electromagnetic pulse generators capable of disabling enemy systems. These hexagonal devices can be connected to each other forming chains to favor maneuverability.

The third proposal consists of a rectangular shaped boat equipped with a runway take off and landing for unmanned aircraft which, in turn, will be able to deploy their own detachable drones manufactured on board with the help of 3D printing technology in the air.

The #RoyalNavy worked with engineers from industry and academia to design an autonomous fleet of the future. First up, a carrier vessel that uses biofuel and wind power to run and houses both uncrewed boats and crewed submarines. #futurenavyhttps://t.co/dP1LZEBGqRpic.twitter.com/1gLZ2gufnP

One of its most crucial features will be its transformable hull, which can change shape to suit the circumstances of each mission, adjusting the runway surface according to the size of the ship that is going to use it.

Finally, the designers presented a trimaran-type surface multihull craft that will carry underwater attack drones with stealth technology, capable of recharging their batteries. harnessing renewable energy sources or even plankton or other biological resources underwater.

“In a future scenario, if we find ourselves unable to compete traditionally in terms of mass, we must think differently if we want to regain operational advantage”, declared Vice Admiral Nick Hine, referring to these groundbreaking proposals.

Another concept of the future fleet included an autonomous combatant boat that can work both on the surface and below the waves. It has interchangeable modules so it can be adapted for any mission. #futurenavy#RNInnovationhttps://t.co/dP1LZEBGqRpic.twitter.com/XUMCIuCEPJ

“The young engineers who worked on this project are thinking radically and with real imagination, and they reflect how the Royal Navy thinks too,” he added.