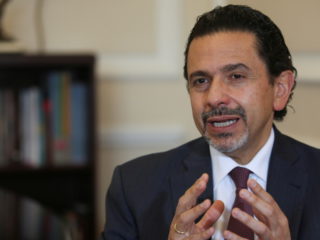 In the framework of another day of mobilizations and in the midst of stalled negotiations with the National Unemployment Committee, the Government of Iván Duque announced on Monday the activation of a panel for evaluating guarantees for public demonstrations, which will have among its objectives a mechanism for dialogue between the Police and the public.

The High Commissioner for Peace, Miguel Ceballos placeholder image, who is the main government spokesman before the Unemployment Committee, reported on the activation of this evaluation table during the second day of dialogue with the organizers of the protests.

The table in question also has among its powers that of “propose mechanisms for dialogue and mediation between the Police authorities and the public within the framework of the exercise of the right to demonstrate, “according to Ceballos.

📽 #EnVideo | Stop Declaration @CommissionerPeace, Miguel Ceballos, on the activation of the National Committee for the Evaluation of Guarantees for Public Demonstrations. pic.twitter.com/v1Wkuz8zTq

On Duque’s instructions, there will be representatives from the Ministries of the Interior and Defense, the National Police, the Presidential Council for Human Rights and the Office of the Ombudsman. In addition, three delegates from “human rights organizations or platforms” were invited to three representatives “of the organizers or relevant social movements that call the public and peaceful demonstration“, according reported Ceballos.

On the second day of talks with the National Unemployment Committee, the Colombian Government reiterated its rejection of roadblocks, and as a condition to find a way out of the social crisis, he demanded that this practice cease. “We cannot move forward, in the progress of the agreements we want to reach, with the presence of blockades,” Ceballos declared.

For its part, the aforementioned committee announced for Monday night a report on the progress of the dialogue with the Duque government and the next steps that social organizations will take.

After the talks on Sunday, May 16, the National Unemployment Committee reported that it had handed over to the Government a protocol of respect for human rights during social protests.

From April 28 to May 16, the Colombian Ministry of Defense records 14 civilians killed in the protests, along with 10 more deaths that are being investigated, and the death of a police officer.

Likewise, the Colombian Government registers 802 civilians and 920 uniformed injured. In the framework of the mobilizations, the authorities have arrested “in flagrante delicto” at 735 people, according to the most recent balance.

In contrast, the Unemployment Committee report 50 dead, more than 600 injured and 500 missing.

While the government and the committee are in dialogue, the mobilizations continue. This Monday protests were registered in the cities of Bogotá (Cundinamarca), Barranquilla (Atlántico), Cali (Valle del Cauca), Medellín (Antioquia) and Neiva (Huila).

Meanwhile, in the town of Yumbo (Valle del Cauca), some protesters threw stones at the Mayor’s Office. Last Sunday, the municipality was the scene of violent incidents that left one dead and 16 people injured, according to they picked up local media.