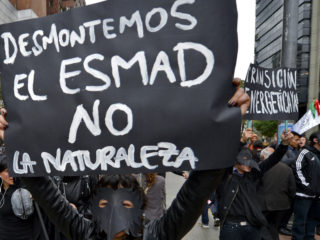 Of the 227 lethal attacks on environmental defenders in the world in 2020, 65 occurred in Colombia. The number of murders keeps the South American country for the second consecutive year at the top of a list drawn up annually by the NGO Global Witness, which warns of the danger of this “endemic violence.”

The total number of homicides, which corresponds to about four murders a week, confirms that last year was one of the most lethal on record. Neither the covid-19 pandemic nor the mandatory closures that were established to contain the virus were enough to stop the lethal attacks against defenders, indeed, they encouraged them.

“In that time, the gloomy outlook has been revealed: the evidence suggests that the climate crisis is intensifying, violence against those who protect their land and our planet also increases”, highlights the document that was published this Monday.

What happens in Colombia?

The signing of a peace agreement between the Colombian government and the defunct FARC guerrilla in 2016 seemed like a turning point for the cessation of violence. However, five years later, the questionable implementation of that pact has not only harmed demobilized ex-combatants, but also defenders of the land and the environment.

According to the NGO report, of the 65 defenders killed last year in Colombia, at least a third of them were indigenous and Afro-descendant activists, and almost half worked in small-scale agriculture.

Of the 65 defenders killed last year, at least a third of them were indigenous and Afro-descendant activists, and almost half worked in small-scale agriculture.

The problem, according to the research, is that in the most remote areas “paramilitary and criminal groups have increased their control through violence against rural communities and the lack of state action to protect them. ”

The rearrangement of the armed actors, which emerged after the demobilization of the FARC, has resulted in new struggles for territory and, naturally, in an increase in violence. The pandemic also worsened the situation because it caused attacks against defenders to occur in their homes “and the government’s protection measures were cut back,” the document details.

The most worrying thing is that at least 17 murders of activists had to do with people who participated in the coca crop substitution programs, provided for in the peace agreement to allow peasants to grow legal crops. From 2016 to mid-2020, the Somos Defensores de Colombia program has accumulated 75 records of attacks of this type.

The trend does not appear to be abating either. So far this year, the Institute for Development and Peace Studies (Indepaz) has documented the murder of at least 115 social leaders, and 36 ex-combatants who signed the FARC who demobilized after the pacification agreement with the Government.

On the other hand, after almost a year of delays by congressmen in Colombia, the ruling party managed to stop the ratification of the Escazú Agreement, a regional pact on environmental matters that envisages guaranteeing the implementation of the rights to environmental information, public participation in decision-making with an impact on the area, and access to justice.

The list of documented attacks by country also reveals the levels of violence in the Latin American region, since of the total recorded, 165 were perpetrated in the region.

In the case of Mexico, the increase in lethal attacks in more than 67% compared to 2019 and the fact that forest clearing was linked to almost a third of homicides against defenders. On the other hand, half of the fatalities belonged to indigenous communities.

The outlook is even more bleak if impunity is taken into account, since according to the data cited by the Global Witness investigation, up to 95% of cases in Mexico do not end in trial.

In Peru and Brazil there is another trace of these violence, since the defenders were mostly attacked for protecting certain ecosystems from deforestation and industrial development. Almost three-quarters of the known killings occurred in the Amazon region shared by both countries.

Alert in the ‘Global South’

The document prepared by the NGO makes it clear that the climate crisis “it is a crisis against humanity“, thus showing the importance of the work carried out by environmental defenders, even at the cost of their lives.

But the violence they suffer is not only homicidal. In addition to the murders, there are other practices that include threats, intimidation, surveillance, sexual abuse and criminalization, for which it is recognized that the registration of deaths is not sufficient to account for what activists suffer, since many of the attacks are not reported.

On the other hand, the trend indicates that the so-called ‘Global South’ monopolizes this type of violence: only one of the 227 murders recorded last year occurred outside that area, specifically, in Canada.

However, we must not lose sight of the fact that the ‘Global South’ has historically been the place from which the ‘Global North’ extracts the raw materials for its development (responsible for much of the current climate crisis). In this way, the cycle is completed: extractivism guarantees stability to industrialized countries, while violence looms over the countries that supply the ‘commodities’, making victims of indigenous people, peasants and Afro-Colombian communities.

“More than a third of all the fatal attacks were against indigenous peoples, despite the fact that indigenous communities represent only 5% of the world’s population. Indigenous peoples were also the target of 5 of the 7 mass murders recorded in 2020, “the report emphasizes.

Global Witness does not ignore the responsibility that extractive industries have in violence, since its economic models “overwhelmingly prioritize profits over human rights and the environment”, and therefore they act with “almost total impunity“in countries rich in natural resources.

“Because the balance of power is in favor of corporations, it is rare for someone to be arrested or taken to court for killing defenders,” the investigation continues.

Likewise, while Colombia and Mexico top the painful ranking in Latin America, the Philippines also ranks third with the most killings of land defenders, registering 29 in 2020.

“According to our data, more than half of the lethal attacks were directly related to the Defenders’ opposition to mining projects, logging and dams “, details the document, which reveals another incontrovertible fact: the violent repression by the police and the army.

The NGO’s recommendations include demanding governments more protection for defenders, placing greater limits on extractive industries, legislating to guarantee respect for the right to a healthy environment and forcing States to comply with international protocols, such as the Agreement. in Paris, to improve the current condition of activists, who are “the last line of defense against climate collapse.”