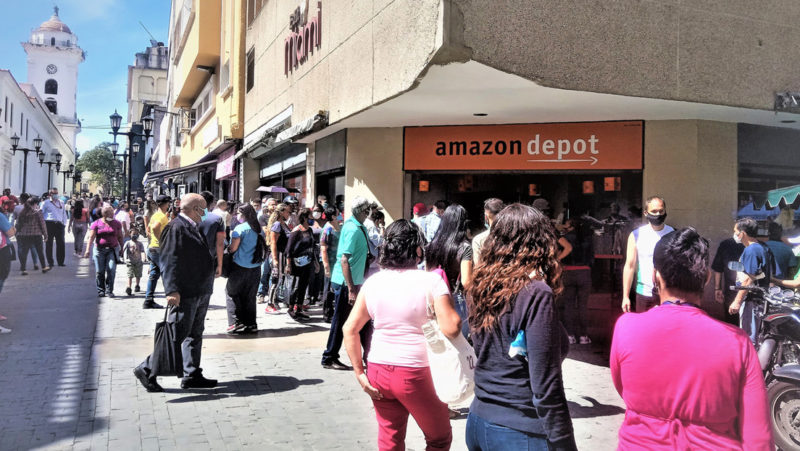 Since its inauguration, held last week, a store has sparked controversy around the economic issue. It is a business located in the historic center of the Venezuelan capital, where long lines of shoppers eager to enter to check the merchandise.

It’s called “Amazon Depot” and customers are willing to spend up to two hours to get inside, while they wait outside. What is striking about the store, according to several of the people standing in line, is that no one has any idea of ​​the products being sold.

“Do you want it? Find it,” reads a sign posted at the entrance. Thus, potential buyers stand in long queues, hoping to find an item that catches their eye and is useful to them.

The concept of the store is that people enter to review boxes of products that were never recalled from Amazon’s central warehouses in the US and that the owners of this business import to Caracas.

Xiomara Giménez, one of the buyers, comments that lasted more than an hour “jurungando”, a word that in Venezuelan slang means “poke around.” She found it a good option because she was able to purchase items from recognized brands at affordable prices. In his case, he said, he got three designer jeans that cost him $ 15 each.

“I was passing by and I saw the store notice that said Amazon, it caught my attention and I stood in line. I had to wait a long time. When you are inside, you get products of all kinds, especially electric, and anything is worth between 5 and 20 dollars. There are toys for children, things for babies, pet food, lights for Christmas, clothes, swimsuits, pants, blouses, dresses, intimate clothes, “says Giménez, who recalled that years before the economic crisis, there were stores in the country that sold under this modality.

The appearance of this place in Caracas has generated controversy and various comments in networks social around the new economic dynamics in Venezuela, which shows its extremes: one in which the majority of the population continues to overcome financial adversities and another that, to a lesser extent, has the possibility of making purchases of this type, which could be considered luxury consumption.

To enter the premises, the person must do so with a mask due to the biosafety measures that are maintained by the covid-19 pandemic.

If the client has a suitcase, bag or item in hand, you must leave it in a closet. At the entrance there are security personnel who are in charge of opening and closing a railing that they use to control the access and exit of customers.

Once inside, surveillance is extreme and has the support of more than 10 vendors who warn that you can not take photos or videos. On the first floor, the products are placed on tables marked with prices and colors.

The garments or items are offered at 5, 10, 15 and 20 dollars. Users have permission to review everything and, in fact, on one of its walls the store places a message that says: “Jurungar is the idea”, a phrase that urges to review each product so that the customer can take whatever they want and can .

However, at the tables there are also closed boxes. To open them, sellers must be supervising and generally rush potential buyers to decide quickly what to bring so they can make way for other customers.

Why does it generate so much controversy?

The current economic dynamics in Venezuela, which on the one hand shows more activity in shops and on the other hand, it leaves a large part of the population with incomes that exceed the 10 dollars a month shows how inequality has deepened.

Faced with this situation, warned by the president, Nicolás Maduro, the appearance of this type of stores is incomprehensible for a part of the citizens, although there are those who observe them as a reflection of economic growth and the end of the hyperinflationary crisis that the country for years.

Mr. Wilmer Ramírez, who was looking at prices around the store, comments with amazement how In recent years, several commercial premises have been opened in the city such as cafes, restaurants, ice cream parlors, and shoe, clothing and toy stores, which import a variety of merchandise despite the sanctions imposed on the country.

“There are many new places that I have seen. They bring everything, and can buy a person with little money and one with a lotBecause they sell very expensive things and others that one can buy with effort, “he says.

Meanwhile, Mrs. Solange Rodríguez, a retired lawyer, says she is excited to see that people are shopping like they haven’t done in yearsBut she admits that she still cannot afford these expenses because her income is limited to the monthly pension and financial aid she receives from the State.

“I get excited because I see that there are more people on the street, buying their little things, you see movement. I haven’t seen that for like five years and I’m happy even though I can’t do it, because the pension barely gives me to buy a few things. Thank God I have a nephew who helps me with food, because I don’t have children and at my age people don’t give me work. “

The controversy surrounding the inauguration of this commercial premises joins others generated in the country on the economic issue. One of the most recent was the star of the famous businessman of the show Osmel sousa, who is known as a beauty pageant organizer.

The also designer published a video on his networks inside a supermarket in Caracas and says that had a mental lapse believing he was in Miami, USA: “I did not know that there was this thing in Caracas, I thought it was abroad, it is something wonderful (…) Two floors with everything you need, one thing, I have been haunted.”