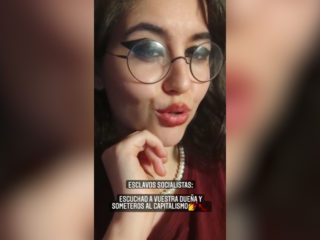 The artist Sofía Rincón (Madrid, 1993) has released a new video in which she is about to “dominate” the communists to convert them to capitalism. OKDIARIO has spoken with Rincón about this new publication.

QUESTION: What led you to make this video?

Q: How many have you converted to capitalism?

R: I am afraid that the vast majority of my slaves are capitalists in theory and in practice, but it is true that among my followers I fortunately have all kinds of ideologies. And curiously, several followers of that ideology have told me that they were attracted to my domination in part because I was liberal. Or as they call it “neoliberal.”

Q: Is there a lot of submissive communists?