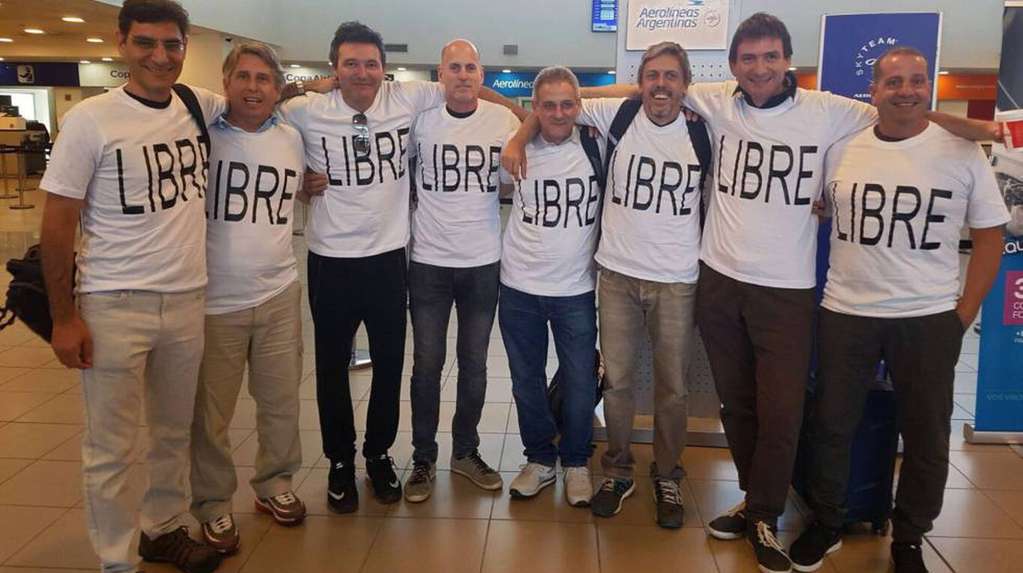 The dramatic story of the widow of one of the Rosario residents murdered in 2017 in New York: “They brought me an embalmed body that I couldn’t see”

Ana Evans he was in the garden of his house trimming the plants. In the kitchen, his cell phone kept ringing. He realized after a while. He answered and a friendly voice asked him a forceful question: “Did you talk to Hernán?”. Ana answered yes, that an hour ago, an hour and a half at the most, she contacted her husband. That he sent her pictures of New York, told her what he had had for lunch and told her that he had little time, that they had rented bicycles at Central Park and were going for a ride.

“He told me to turn on the TV. I entered my house and put TN. They showed some images of bicycles rolled over, they said that something was happening in the United States. I began to call Hernán insistently. He never attended me. When we managed to communicate with their friends they confirmed that it was them, but I thought they were talking about an accident. The FBI kept the information and for hours I didn’t know anything else. I called the consulate, all the hospitals; during those hours I was hoping that they are saving his life and that soon I would be able to talk to himEvans recalled.

The sequence occurred on October 31, 2017 in the city of Funes, Rosario. Thousands of miles from Evans’ home, the news broadcasts live an “accident” in Manhattan involving a group of Argentines. The data were scarce and what was transmitted in Argentina still lacked precision. The future of that Tuesday delivered certainties like daggers. The “accident” had been an attack and in it eight people had died, of which five were from Rosario.

Evans was called during the afternoon to convey the worst. Hernán Mendoza, her husband, an architect by profession, had been assassinated by Sayfullo Saipov, a native of Uzbekistan, who had lived since 2010 in Tampa, Florida, and had rented a van through which he managed to perpetrate the crimes. In the deadly rush killed Diego Angelini, Hernán Ferruchi, Alejandro Pagnucco and Ariel Erlij. Also two Americans and a Belgian.

All made up a group of friends who projected the North American odyssey with a purpose: celebrate 30 years of graduation from the Polytechnic Institute of Rosario. Loving since childhood, they joined in an adventure that began on October 27 of that year, with a brief stopover in Boston and a full week in the Big Apple. The survivors were also 5: Guillermo Banchini, Ariel Benvenuto, Martín Marro, Juan Pablo Trevisán and Iván Brajkovic.

From that October 31, a portion of Evans’ memories was forever blank. It happened when he got the call that caused the blackout. “I fainted and woke up in the shower not knowing what had happened”, he remembered. When he rejoined he took his cell phone again and called. Subsequent communications were to verify the information. Or to want to convince those who were there that it was a mistake.

“I spoke with him early that day, because we were very connected. I have images of that trip almost as if we had done it together. He sent me photos since they were on the plane, in São Paulo during the layover … At every subway station in New York he would connect and tell me things, “said Evans.

The group of friends dreamed of the trip in a barbecue in Rosario and materialized it with a detailed schedule that included the excursions and outings that they would do en bloc. Eight flew from Rosario and the others – residents of the United States – joined there. The ride on wheels was not stipulated. That Tuesday they visited the Solomon Guggenheim Museum and rented the bikes in Central Park. They had lunch at Chelsea Market, where Hernán sent Ana a video. “He sent me an audio from WhatsApp telling me that he was leaving me because they had to keep pedaling. It was the last time I spoke to him “Evans recalled.

During the journey, one of the friends got a puncture on his bicycle and that arrest delayed the journey of the rest. When the ride on the bike path – which runs parallel to the West Side Hightway – continued, Ariel Benvenuto took his cell phone and filmed the last group video. In the images they are distinguished walking in pairs, laughing and joking, while the breeze from the Hudson River caressed their faces and still allowed them to dream.

Benvenuto was also the one who told his wife of what happened. He did it through the cell phone of a New York policeman. Hours later he called Evans to tell him that his close friend was dead.

“I talk a lot with my children, I think that dialogue is important to be able to clarify ideas above all things. The fact that Hernán is not physically present does not mean that they cannot feel him close or accompanying him in another way. Today I have to rebuild his dad’s life for him. Reveal to them what plans and ideas he had and how proud he was to be a father, of this family, ”Evans said.

The woman continued: “The hardest part as a mother was the day I received the news that he was deceased. It was breaking the news, sitting them down, and telling them what had happened. The information overwhelmed me because it was something unexpected and unintelligible. The conversation was short and specific. The exact information, and no more because if not they would not be able to process it. I applied the same for myself. To them They still lack time, growth and maturity to realize what happened. When they realize that their father was murdered and his right to life violated in this way is going to be a hard blow to understand.

Evans is the only family member of the victims who decided to hire a lawyer specializing in terrorism. Its purpose is that the cause, almost four years later, does not remain stagnant. “Children are not thought of as victims of terrorism, which they are. Their father was killed in a terrorist attack and they are victims of that situation. There is no where to lean, where to look ”, he explained.

His lawyer, Juan Felix Marteau, indicated in dialogue with TN that “the investigation carried out by the United States Attorney’s Office for the Southern District of New York ended at the end of 2019, charged to the attacker the crimes of homicide and intentional injury, as well as support for the terrorist organization ISIS ”.

“Prosecutors requested the death penalty, which was validated by the Attorney General of the Donald Trump administration. The first trial date had been set for April 2020, which was postponed due to the pandemic. Now the start of the trial has not been regenerated because the federal judge has decided to appear at the hearings of the defendant’s relatives who live in Uzbekistan, which is difficult to carry out due to COVID protocols and other regulations, “added the lawyer. .

“We request in this opportunity that a hearing be set as soon as possible to close this chapter so painful for the relatives, especially the children of Hernán Mendoza. The charge test has been fully produced and there is no legal solution other than the maximum penalty for this terrorist attacker ”, Marteau completed and stressed that he also carries out a civil lawsuit that is “conditioned to the result of the criminal trial.”

“Not only were we not compensated, but we also perceived a total absence of the StateThey didn’t even help us with international claims for the American judge to set a date. Not even a telephone support, or what to do to demand justice in a terrorist attack. My children are very afraid, especially that something will happen to me. We did not see Hernán deceased. They brought me an embalmed body that I couldn’t see. For the boys, for a long time, he was still traveling: his car was in the garage and the feeling was that he was going to come back. We said goodbye to him at an airport and we didn’t see him anymore. It’s very tough, ”Evans concluded.