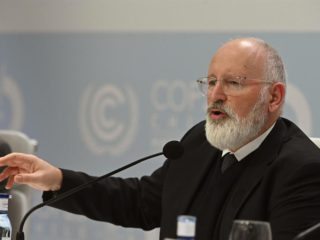 Strasbourg (France), Sep 14 (EFE) .- The European Commission (EC) believes that the current escalation in energy prices in Europe is due to the lack of gas in the market and that the situation should prompt the European Union to ” step on the accelerator “to reduce dependence on imports of fossil fuels.

“If we had acted five years ago we would not be in this situation because we would depend less on fossil fuels and natural gas. Throughout all these years we have seen that the prices of renewables have remained low and stable,” he told the European Parliament the Vice-President of the European Commission responsible for the Green Deal, Frans Timmermans.

The Dutch politician assured that “only 20% of the increase in the price of energy can be attributed to CO2 prices” through the European emissions trading system, the so-called ETS, which taxes the carbon dioxide released by industries. energy intensive.

The price per ton of CO2 in that European market began to skyrocket in March 2020, when it was paid at around 15 euros. 2021 started at around 33 euros and in September it has climbed to 62 euros.

“The rest is a consequence of the high demand in the market. There is a lack of energy,” said Timmermans, who insisted on the need to deploy the necessary policies for the EU to reduce its CO2 emissions by 55% in 2030, regarding to 1990 and progress towards climate neutrality in 2050.

The community vice president warned of the “paralysis that fear of change can cause us,” and assured that the priority should be a policy of redistribution so that the transition does not leave the most disadvantaged behind.

“These measures, one by one, have a price and we have to guarantee that this price is not paid by the poorest” to avoid that “the social part is opposed to the climatic part,” he added.

In his brief address to MEPs, Timmermans pointed out that the international community is facing “an existential crisis for humanity” and that delaying climate action will lead to “tipping points” that will later be more difficult to counteract.

“If we do not act urgently, our children will not forgive us,” he said.