The Ecuadorian Parliament dismisses the Ombudsman, in preventive detention for alleged sexual abuse 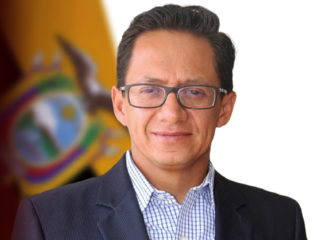 The Ecuadorian National Assembly has approved the removal of the Ombudsman, Freddy Carrión, with 75 votes in favor, 47 against and 14 abstentions. His disqualification from the exercise of public office for two years due to non-fulfillment of functions has also been approved.

Carrión is currently in prison on a preventive basis accused of a crime of sexual abuse that would have occurred at a controversial party held last May, in a state of emergency due to the coronavirus pandemic, in the home of former Minister of Health Mauro Falconí, where he would have arrived in his official car and with police security.

The scandal was unleashed after the publication of a video in which a woman is seen in the elevator of the former minister’s building, together with the security guard. When the doors are opened, a man, supposedly Carrión, struggles with her and forcibly leads her into a corridor. Then he puts her against the wall, while another man, allegedly Falconí, is next to him. Afterward, both men end up fighting each other.

🔴 Images of a fight between the Ombudsman, Freddy Carrión, and the former Minister of Health, Mauro Falconí, circulate in the Plaza del Bosque complex, where they allegedly were at a clandestine party. In the video, a woman is also seen being attacked. An official version is expected. pic.twitter.com/UAIKjqk6cj

Police agents came to the apartment alerted by the neighbors. Carrión and Falconí were found there with signs of having been beaten, as well as bottles of liquor and loud music. Both were detained at that time, although a judge ordered the immediate release of the former minister.

On the other hand, the Assembly recommends the beginning of a process of control and political control against Falconí and the establishment of a political trial is against him if deemed appropriate, according to the release of the legislative body.

For his part, Carrión links the accusation he faces to his actions during the October 2019 protests, when he denounced police abuses, and to his investigations of acts of corruption. Remember that he still has no convictions against it and, regarding the controversial party, he maintains that did not attend any “social gatherings” Rather, it was trying to gather evidence about an alleged plot to vaccinate high-ranking officials by skipping the list of priority groups.