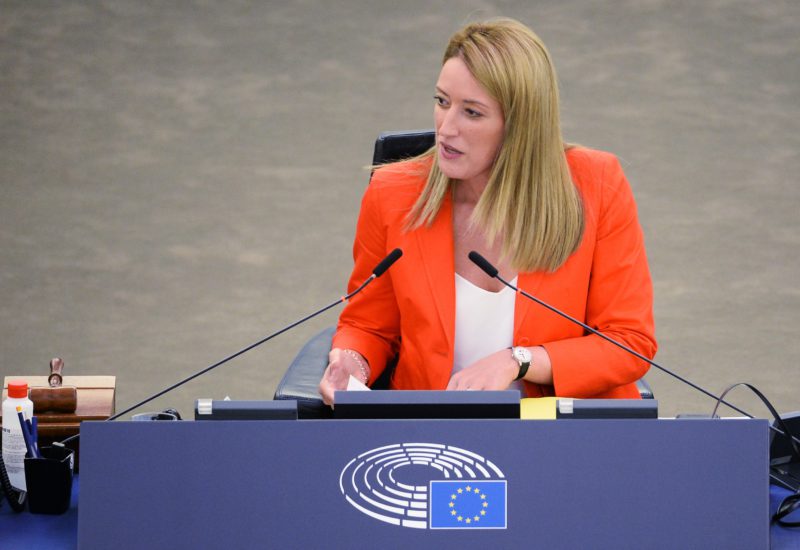 The Maltese MEP Roberta Metsola will be in charge of the European People’s Party to fight for the presidency of the European Parliament. The Socialists have not yet clarified whether they will choose to revalidate the most relevant position in the Parliament of the European Union, but at the meeting that the leaders of the main delegations that make up the group, they made it very clear that they have no intention of giving it to the popular without making them sweat. So far, Metsola is vice president of the chamber and at 42 years old she will be the youngest person to hold this position if she is finally elected.

Until a few months ago, it seemed clear that when the legislature reached the halfway point, there would be a rotation in the presidency and the socialist David Sasoli would yield the chair to the popular Manfred Weber. That seemed to be the dynamic implicit in the pact signed in 2019, after the elections, in which the different European political families shared the main positions: the Commission would be chaired by the German Úrsula von der Leyen; the European Council, the Belgian liberal Charles Michel; Spanish socialist Josep Borrell would be the High Representative for EU foreign policy and the presidency of Parliament would rotate between the two largest groups.

But a few months ago Weber resigned from the post to which he seemed destined to continue leading the popular parliamentary group and aspire to the presidency of the European People’s Party. And from here the movements and rumors began. First, on who would be the popular candidate – the name of the Spaniard Esteban González Pons has come to be seriously shuffled – and, later, on whether the Socialists would accept to give up the position without fighting. On Tuesday they did not completely clear the question, but they are, at least, going to measure whether they have a chance of keeping the job. “It is true that [en 2019] There were no explicit names, but implicitly it was clear that it was him ”, they argue from the social democratic group to say that now the scenario is different from that of two years ago.

It is not the only argument that socialists use. They also come to admit that the position that Borrell occupies does not have the relevance of the other three. Therefore, they point out that if they finally lose the Presidency of Parliament, their role is greatly diminished when they are the second group by number of deputies. And, of course, they resort to the result of the German elections as the German Social Democrat Olaf Scholz is going to replace the Christian Democrat – and member of the European popular family – Angela Merkel. They believe that this distribution of positions would not correspond to the political scenario of the continent: from December there will be Social Democrats in command in Madrid and Berlin, socialist participation in the Draghi government and the Elysee will be occupied by a liberal, Emmanuel Macron; on the contrary, the popular ones will not have the power in any of the big capitals.

But this does not convince the popular people, who plan to fight for Roberta Metsola to be the new president of the European Parliament. Maltese politics have been imposed on the Dutch Esther de Lange and the Austrian Othmar Karas. “She is an exceptional candidate to lead this institution and will work with all political families,” the popular group has proclaimed on its Twitter account. Metsola is a 42-year-old lawyer from Malta, the smallest state in the EU, who only sends two MEPs to the chamber. His profile is ideal to seduce other groups, since he comes from a small southern country, compared to those who occupy the other two flashy positions: Von der Leyen (Germany, the largest country in the north) and Michel (Belgium, the largest country in the north). median north).