Home
World
The feminists of Podemos set fire to 25-N: they accuse Ayuso of being “behind the murdered women”

The feminists of Podemos set fire to 25-N: they accuse Ayuso of being “behind the murdered women” 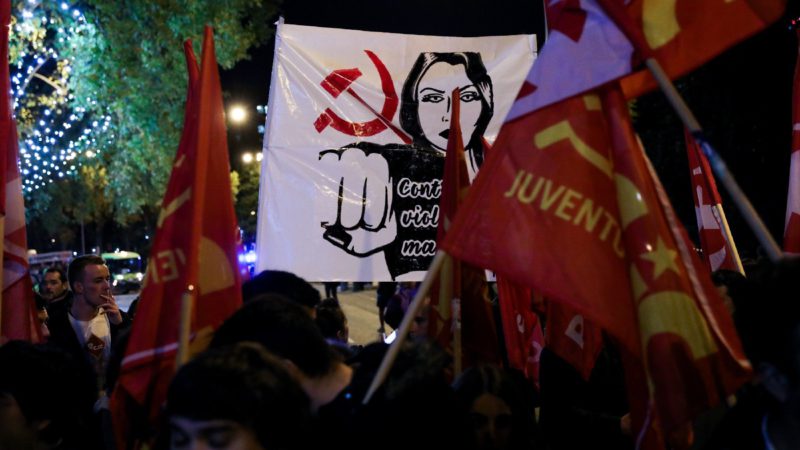 Feminists akin to United we can have wanted this year to politicize the celebration of the 25-N, International Day for the Elimination of Violence against Women, attacking the Government of Isabel Diaz Ayuso in the Community of Madrid, who are accused of “Be behind the murdered women, attacked and threatened ».

Specifically, the manifesto promoted by the assembly of Barrios y Pueblos 8M de Madrid calls for mobilization on November 25 to demand “Feminist education, justice and resources” in the face of “sexist violence.” For the latter, the activists blame the Ayuso Executive and not the Ministry of Equality of Irene Montero, to such an extent that they link the acts of “gender violence” with the Government of Puerta del Sol.

“Behind the murdered, attacked and threatened women are institutions, such as the Community of Madrid, which stands aside to condemn gender violence and that it denies the necessary resources to fight against sexist violence “, reads the manifesto.

#25NTomamosLasCalles Against all #ViolenciasMachistas Feminist Resources, Education and Justice 💜 #25NRacismoEsViolencia
Not one less. Alive, free and combative we love each other !! 🔥✊🏽💜 pic.twitter.com/OAJP5qAFAu

«In 2020, the Community of Madrid has not spent a single euro of the budget for cyberbullying, gender training for psychosocial teams in violence courts or for the employment of women victims of violence. Against all sexist violence, feminist resources, “adds the statement with serious accusations to the regional Executive.

It so happens that last year, the president of the Community of Madrid already asked not to politicize the fight against gender violence, since equality between men and women must be “Away from ideological bias” and “out of partisanship”. However, Podemos feminists have turned a deaf ear to this call for responsibility.

In the institutional act of the Community of Madrid on the occasion of 25-N a year ago, where the educators of the Comprehensive Attention against Gender Violence network were honored, Ayuso remarked that the regional government has been promoting resources for women who need it, with residential centers, sheltered flats, financial aid programs and psychological or emergency centers, among otherss.

At this event, Díaz Ayuso also highlighted the need to work so that men and women are “before the law and society and opportunities.” Along with this, he appealed to “parents, siblings, friends and even children” to “fight”, because they «Many times they are victims» and they suffer because their daughters, sisters or friends are suffering from “a person who one day stopped being a man to become an element that destroys the lives of all those around him,” he said.

OKDIARIO has revealed the links between the 8M Commission and United we can. For example, the official convener of the massive 8-M demonstration held in 2020 in Madrid when the coronavirus was already rampant, was a candidate for Podemos in the 2019 municipal elections. The name of the feminist activist Alicia Lopez Hernando She was listed as “promoter” and head of the march in the files analyzed by the Civil Guard.

López Hernando attended the United We Can-Izquierda Unida-Equo lists at the City Council of El Boalo (Madrid) in those elections. Previously, she was also a candidate for Anti-capitalists to the Congress of Deputies in 2011 and alternate to the Senate for the United Left (IU) in 2004.