Home
World
The first trial in the history of the Vatican begins with a cardinal accused of corruption: Angelo Becciu

The first trial in the history of the Vatican begins with a cardinal accused of corruption: Angelo Becciu 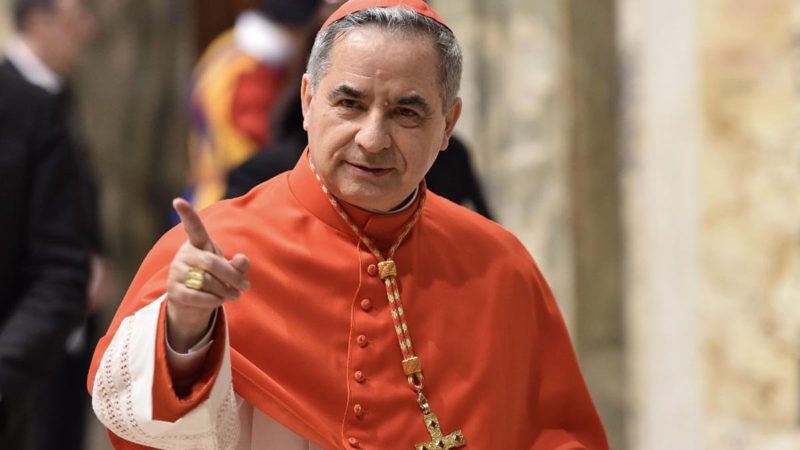 The highest judgment by corruption and embezzlement in the history of Vatican It started this Tuesday with the first audience in one of the rooms of the Vatican Museums, where a cardinal from whom Pope Francis has already withdrawn the privileges of the cardinal, the Italian, will appear for the first time as a defendant. Angelo Becciu. In the room, set up for the occasion, former Cardinal Becciu, who served as Substitute for the Secretary of State between 2011 and 2018, will be tried along with a group of nine defendants, between businessmen and officials of the Roman Curia.

The court, chaired by the former Italian anti-mafia juez Giuseppe Pignatone, you will have the task of determining if the Holy See was defrauded by a group of businessmen or if more than a system of internal corruption led by hierarchs of the Church.

The defendants face several years in prison for fraud, embezzlement, extortion, money laundering and abuse of power in a scandal that includes complicity with espionage, tax havens and that has generated a million euro hole in the Vatican accounts.

The case also represents a challenge for the Pope Francisco, since it reveals the lack of control in Vatican finances, for which he had to initiate an internal reform, and in fact brings to light the dark privileges of various Vatican entities.

The reckless use of part of the money for the poor That every year churches around the world donate to the pope’s charities, also contributed to the scandal. Among the ten defendants, half were in the service of Pope Francis during the controversial two-phase purchase of a luxurious 17,000 m2 building in the posh London borough of Chelsea, from which the pope has asked to get rid of it quickly.

The acquisition of that building, to a price higher than its real value, was carried out through highly speculative financial packages, by means of two Italian businessmen residing in London. In 2013-2014, the Secretary of State requested loaned more than $ 200 million (the majority to Credit Suisse) to invest in the Luxembourg fund “Athena” of the Italian-Swiss businessman based in London, Raffaele Mincione.

The money was loaned thanks to the recognized solvency of the Vatican. Half of the sum went to the purchase of 45% of the London building and the other half to investments in the stock market. Mincione used Church money to “Speculative operations”, including the purchase of Italian banks with financial problems, maintains the prosecution.

The Holy See, which ended up registering stock market losses, did not have the ability to control such investments, so it decided four years later, at the end of 2018, to end that alliance.

For this, the Holy See chose as the new intermediary Gianluigi Torzi, who negotiated the departure of Raffaele Mincione, indemnifying him with 40 million pounds sterling (55 million dollars) and modifying the financial agreement so that the Vatican finally became the sole owner of the building.

Torzi in turn took control of the property (through voting shares) and then extorted the Secretary of State to obtain 15 million euros (almost 18 million dollars at the current exchange rate) for his departure, according to the text of the criminal court indictment.

The magistrates also identified the two key figures who helped Mincione and Torzi enter Vatican networks in exchange for money. Is about Patrizia Crassus, a well-known Swiss businessman, who managed the money of the Secretary of State for decades. The other is Fabrizio Tirabassi, an important lay official of the Secretary of State, in charge of investments, who also received commissions from the banks for his interventions and was considered the right hand of Cardinal Becciu.

As in all scandal, the revelations of a mysterious female character, nicknamed the “Lady of the Cardinal”, oblivious to the London purchase, contributed to increase suspicions around Cardinal Becciu, dismissed on September 24, 2020 by Pope Francis for suspicions of embezzlement, also stripping him of his cardinal rights.

The forty-year-old woman who assured that he carried out intelligence activities on behalf of the Holy See to free religious kidnapped by the world, he received juicy remunerations, according to the so-called “Becciu method”, as the Italian press calls it.

The big question now is whether the case will spill over to other personalities in the Church hierarchy. The trial will also address the payments that the Secretary of State and the Italian Episcopal Conference granted by order of the cardinal to several companies owned by one of his brothers. A mechanism similar to the one used to help friends when he was nuncio in Cuba and Angola.