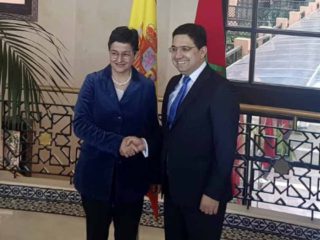 Arancha González Laya, Minister of Foreign Affairs of Spain, and her Moroccan counterpart Nasser Bourita held a meeting by videoconference to discuss various matters of interest to the Moroccan kingdom and Spain. Both diplomatic officials expressed the good harmony between the two nations, in line with what the Heads of State of the two countries have been expressing.

It should be remembered that even the King of Morocco, Mohamed VI, has been describing Spain as a “natural partner” of his country, demonstrating the good relationship between the two Mediterranean neighbors.

In the framework of their online interview, Nasser Bourita and Arancha González Laya made reference to the next High Level Meeting that is pending to be held when the conditions of the COVID-19 health crisis finally allow it. This conclave should have already taken place, but due to the pandemic, the visit of the President of the Government of Spain, Pedro Sánchez, to Moroccan lands had to be suspended.

Both Morocco and Spain work to strengthen collaboration in various key sectors such as the economy, culture and education. And in the telematic meeting between Bourita and González Laya it was also made clear that both nations want to develop and strengthen the ties between the two parties to make the most of the economic and commercial take-off that is expected when the current coronavirus pandemic ends or, therefore less, when its impact is relaxed enough.

Morocco has been working for months to minimize the impact caused by the health crisis, with restrictions and important measures aimed at reducing infections and deaths, together with the planning of an ambitious vaccination campaign to immunize most of them in the shortest space of time. of the population possible. In addition, as an example, in the last hours it was known that the North African country had still restricted air connections with certain countries, such as the United Kingdom or Turkey, to prevent a further spread of the pathogen.

Spain, for its part, also continues to fight against COVID-19 and is immersed in a vaccination campaign that tries to reverse the impact of the virus. Along with certain restrictive measures to prevent the rise of infections, waiting for a better situation to further reactivate the economy, and, above all, a sector as important for next summer as tourism, a great national source of income. income.

The foreign representatives of Morocco and Spain also analyzed various issues of interest such as security and the fight against jihadism, deepening the fight against terrorism in key areas such as North Africa and the Sahel region. Both areas of tremendous interest for the two countries given the existing interest in greater regional stability to avoid the outbreak of more conflicts and associated problems such as irregular migration.

Special mention was made to Libya and its current path towards peace with the talks between the parties in the Libyan civil war with a view to reaching agreements regarding the country’s institutions and in relation to the agreement sealed for the next celebration. December month of elections agreed upon after the appointment of the new Libyan government with the new Prime Minister Abdul Hamid Dbeibah at the helm. All this after negotiations that were carried out in Libya itself, in Egypt, in Switzerland and in Morocco, the latter country that has collaborated intensely in promoting the pacification of the North African country.

In the telematic meeting between Nasser Bourita and Arancha González Laya, reference was also made to the great diplomatic advance that is taking place regarding the situation in Western Sahara, the solution of which is seen within a form of autonomy included in the sovereign structure of Morocco. Most of the international community advocates the recognition of the Sahara as an autonomy integrated into the Kingdom; Above all, as a result of the great impulse that this formula received with the express support of the previous United States Government of Donald Trump, which recognized Moroccan sovereignty over Western Sahara, while the Alawite kingdom established diplomatic ties with Israel, following the steps from other Arab countries such as the United Arab Emirates, Bahrain or Sudan, which recognized the Israeli state thanks to pacts sponsored by the North American giant.