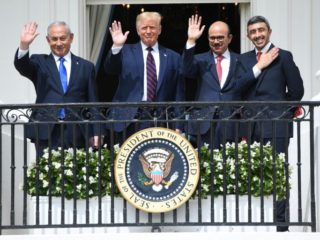 It has been a year since Israel and the United Arab Emirates normalized their relations through an agreement negotiated by the United States, which has resulted in a series of agreements ranging from tourism and aviation to cutting-edge technology.

On September 15, 2020, the Emirates became the first Gulf country to establish formal relations with Israel, and the third Arab country to do so after Egypt, in 1979, and Jordan, in 1994.

Bahrain signed the same day and later Sudan and Morocco joined the Abraham Accords, negotiated by Washington, to normalize relations with Israel.

These are some key aspects of the historic agreement.

– What are the economic benefits? –

Emirates and Israel want to maximize the economic benefits of standardization, especially Dubai, which wants to expand its tourism and technology sectors.

The two sides opened embassies in the other country and signed a plethora of trade agreements.

Since last year, several Israeli companies in artificial intelligence, financial technology and agriculture have settled in the Emirates.

The exchange between the two countries, whose economies were hit by the coronavirus pandemic, reached $ 500 million in August, excluding investments, thanks to agreements in tourism, aviation and financial services.