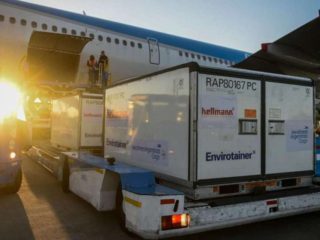 On May 4, the Chinese embassy in Argentina announced that both countries “Reached agreements” for the local production of Sinopharm vaccines against the coronavirus. It is a serum that the Government of Alberto Fernandez already acquired to immunize two million people.

The manufacture of this vaccine in Argentina will be carried out in the plant that Synergy Biotech He owns in the town of Garín and as he could know TN.com.ar From official sources, in recent days there have been significant advances to start with local production. The procedures are carried out by the Argentine ambassador in that country Sabino Vaca Narvaja, the authorities of both laboratories, Chinese officials and the Ministry of Health of the Nation led by Carla Vizzotti.

Although it still remains for the laboratory to acquire certain key instruments for the production of the vaccine, in these weeks progress was made in the presentation of documentation and in the necessary agreements to guarantee that the vaccine is produced with the same quality standards as in Beijing. “One possibility is that production starts in August or September”, Said an official of the Ministry of Health of the Nation. Hugo Sigman, who participates in the local production of the AstraZeneca vaccine, is a shareholder in that laboratory.

Although the details of the production process are handled under strict reserve, in a first stage the Chinese state laboratory Sinopharm would send the vaccine asset that would later be packaged in Argentina. This project adds to the local packaging of doses of Sputnik V already carried out by the Richmond laboratory, by Marcelo Figueiras. If the arrival of Asian sera takes place, Argentina would be finishing the production of two of the COVID-19 vaccines available on the international market.

In the case of AstraZeneca, the process is reversed since the mAbxience laboratory produces the active principle in the country and then sends it to Mexico, for packaging.

When the other 6 million doses of Sinopharm will arrive

In parallel to the negotiations to produce the serum in Argentina, the Government agreed weeks ago the purchase of six million doses of this vaccine, which would arrive in the country after the celebrations for the 100th anniversary of the founding of the Communist Party of China, which will be held on July 6. In fact, President Alberto Fernández was invited to participate in the event.

// Argentina does not have any coronavirus vaccine approved for pregnant women: what are the alternatives

“China faced a very strong vaccination and wants to reach a high number of inoculated for the celebration of the 100 years of the CP. Once that occurs, they will release the vaccines ”, they assured this medium from the Casa Rosada. The CCP was founded by Mao Zedong and 12 other young people in July 1921 and has ruled the Asian giant since 1949.

The same sources said that of the six million compromised vaccines, 2,000,000 could arrive in July and the remaining August. Vaccine delivery varies based on laboratory availability and global context. Argentina had already acquired about 4 million serum from Sinopharm, which were used to vaccinate about 2 million people. Much of these were used to inoculate teaching and non-teaching staff in schools across the country.

In fact, on Thursday, May 4, it was a surprise announcement from the Government since since the last delivery of the Sinopharm – last April – in the Casa Rosada they assured that it was difficult to acquire new doses due to China’s need to vaccinate its own population. As he could know TN.com.ar through a request for access to public information, the serum has a market unit cost of $ 20.