The heaviest rains in 1,000 years: heavy floods wash away people and ‘swallow’ cars in China (VIDEOS) 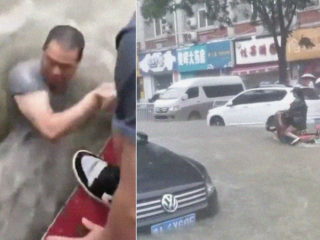 Large parts of central China’s Henan province were under water on Wednesday in what meteorological experts called the heaviest rainfall in 1,000 years.

Currents Following Heavy Floods Carry People In ChinaSevere floods in Henan province have already killed at least 25 people; they continue to wreak havoc and the currents that form pose a danger to people in the area pic.twitter.com/FPagDnc8xl

According to the latest data, the death toll has risen to 25, while seven people are missing due to severe flooding. A total of 1.24 million were affected by the torrential rains and 160,000 were evacuated, collect local media.

Floods in China ‘swallow’ cars and drag people Unprecedented strong storms in China’s Henan province have caused floods that have killed at least 25 people and forced thousands to flee their homes. pic.twitter.com/T410wchhLu

In particular, 12 people were killed and five injured in a flooded subway line in Zhengzhou, the capital and the worst affected area of ​​the province.

The streets of that and other cities have become torrents, that drag people and vehicles. In some parts of the city power was cut off, as well as trains were suspended, roads were closed and flights were delayed.

2/3: A woman rescued in flood waters in Zhengzhou, Henan (video from WeChat). pic.twitter.com/6fOblgl5OL

Images circulating on the networks show local residents grouping together and struggling to keep their balance, cars floating in the water and subway cars flooded, among other consequences of the natural disaster.

25 dead so far in horrific floods in central #China#China#ChinaFloods#chinafloodpic.twitter.com/wUFRt5e1cM

Chinese President Xi Jinping rated of “very serious” floods in Zhengzhou and other cities in the province, where the flow in some rivers exceeds alarm levels and the dams of some reservoirs have been damaged.

Xi emphasized that The authorities of all levels always must put the protection of people’s lives and property first and take the initiative in flood prevention measures.

Dozens of cars float after floods in central China More than 144,000 residents were affected and a total of 10,152 people were evacuated by torrential rains that hit central China’s Henan province. pic.twitter.com/PYPOZqjxBO