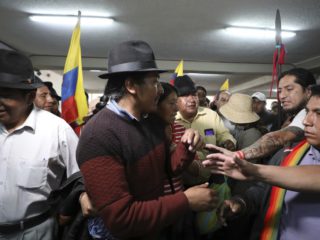 The Indigenous and Peasant Movement of Cotopaxi (MICC) of Ecuador announced that on Friday, June 11, it will hold a mobilization to express its dissatisfaction with the progressive increase in fuel prices and to make other social demands.

The concentration is called for 09:00 in the morning (local time) and will take place in the Latacunga Station sector, capital of the province of Cotopaxi, located in the center of the country. From that point they will mobilize through the streets of the city.

The president of the MICC, Leonidas Iza, organizer of the demonstration, reported that they hope that the government of Guillermo Lasso – installed on May 24 – will send a representative to this mobilization and that they also trust that the president of the Assembly will be able to attend. Nacional, Guadalupe Llori, from the Pachakutik Plurinational Unity Movement.

The bases #MICC we mobilize this June 11 in #Cotopaxi so that the demands of indigenous people and field-city workers are heard. The mobilization will begin at 9:00 am from the “La Estación” sector in Latacunga. Note: All have biosecurity measures. pic.twitter.com/OSfqCXsXMV

Cost of gasoline and diesel

In 2020, the then president of Ecuador, Lenín Moreno, issued executive decrees 1054, 1158 and 1183, in May, September and November 2020, respectively, which allowed the liberalization of fuel prices.

Decree 1054 established a system of fuel price bands, to gradually reduce the state subsidy they had. This caused the value of these products to fluctuate every month since then, based on the average of the prices of Oriente and WTI oil in the international market.

Meanwhile, Decree 1158 released the importation of petroleum derivatives by private parties; specifically, this sector can import gasoline, diesel, industrial gas and others. And in 1183, it was established that the pricing of diesel 2 fuels, premium diesel, extra gasoline and eco-country is in charge of the Agency for the Regulation and Control of Energy and Non-Renewable Natural Resources (ARC).

These decrees were issued despite the fact that in October 2019 there was a social outbreak, in which Iza was one of the leaders, precisely because of the elimination of fuel subsidies, a policy that increased their prices. Following protests, the measure was removed.

As reported by Iza, another of the requests that they will make to the authorities and the financial system is that declare a one-year moratorium to continue paying the credits that the indigenous and peasants have acquired with the banking entities.

“In that one-year moratorium we reactivate the economy, we recover our economy and we continue paying, we do not want to be given gifts or we do not want to harm (the financial sector),” said the indigenous leader, in statements to Radio Águila, and claimed that in these difficult moments due to the crisis derived from the coronavirus pandemic, and due to the delay in loan payments, they have been imposed “more interest on arrears” and more “legal expenses”, which they make that debts become “unpayable.”

He also mentioned that they will ask for a policy for set fair prices for farmers’ products and that the costs of these are stable for consumers, in order to avoid speculation.

Iza indicated that if the MICC proposals are not heard, they will be presented at the seventh congress of the Confederation of Indigenous Nationalities of Ecuador (Conaie), which will be held on June 25, 26 and 27.

What the government says

Faced with the mobilization, the Deputy Minister of Government, Homero Castanier, said on Wednesday, in interview with the radio program ‘Un café con JJ’, that “the Government is not willing to sit at a dialogue table with threats”; despite the fact that Iza has reiterated that it is a peaceful mobilization.

Castanier advanced that the Government does not plan to freeze the price of fuels.