The King underscores the value of the battle against fake news 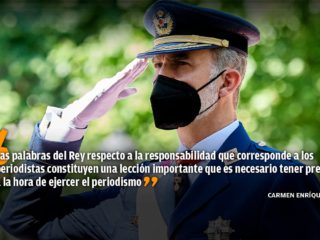 King Felipe has emphasized this week the importance of fighting false news or decontextualized videos disseminated through social networks, which he literally describes as a challenge for journalists and journalism in general. The Head of State has emphasized, in the ceremony of delivery of the King of Spain Awards for Journalism, on this authentic plague that threatens journalistic reputation since the greater prestige for those who practice the profession depends on the quality of the information . But the reflection of Don Felipe did not stop there, but he also allowed himself to point out that the dissemination of these false news or hoaxes makes it increasingly difficult to verify the information by the media themselves and also by consumers. For both, it is not an easy task to differentiate at first glance if the news that is spread is true or a lie, which creates a lot of confusion when evaluating it as authentic or misleading.

It is not by chance that the King wanted to refer to the serious problem raised by the publication of false and unconfirmed information, a threat to good journalism and which is of great concern to media professionals. Nor is it free for Don Felipe to see as a solution to the situation to provide new generations of journalists with a comprehensive and balanced training that helps them form their critical spirit as well as their freedom of thought and expression. For the monarch, the DNA of journalism is in the verification of data, in the search for reliable sources that detect false news and hoaxes that are often spread much faster than the truth. This is how the best writers of this century and the previous one have always done it, who in addition to their literary work, acted as columnists.

Against this background, the King affirmed that useful information, understood as a public service, is very necessary since it contributes to forming people’s criteria. And he added something else: in an environment of information saturation and misinformation, journalists are more needed than ever. Together, of course, with the verification of data that is a fundamental pillar in the construction of certainties or in the orientation within the uncertainty.

At times like today, the King’s words regarding the responsibility that corresponds to journalists when preparing their work honestly and with respect for ethical standards constitute an important lesson that must be borne in mind when exercising the journalism. It is convenient to remind everyone whose mission is to inform citizens of what is happening in different sectors of society every day.