The lapidary irony with which Jair Bolsonaro crossed Alberto Fernández for his controversial phrase: “For you and for Maduro there is no vaccine” 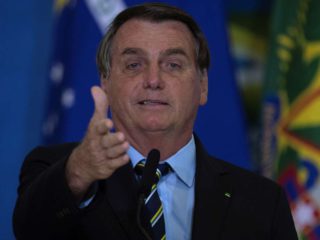 Brazilian President Jair Bolsonaro commented in an ironic tone this Thursday on a statement by Argentine President Alberto Fernández, and said that neither for him nor for the Venezuelan head of state, Nicolás Maduro, there are vaccines.

“The president of Argentina said that they came from Europe and we came from the jungle,” said Bolsonaro, regarding a statement that Fernández gave this Wednesday in Buenos Aires. “I remember when (Hugo) Chávez died and Maduro took office, saying that he spoke with little birds in which the figure of Chávez had incarnated. I think that for Maduro and Fernández there is no vaccine”, The Brazilian president declared laughing to a small group of followers, at the gates of his official residence in Brasilia.

// Alberto Fernández’s unexpected misstep: with a phrase he managed to unite Jair Bolsonaro with the Brazilian press

More seriously, he added that “how they are recording and this is going out,” he wanted to comment that he exchanged messages this Thursday “with former president (Mauricio) Macri”, whose frustrated reelection attempt he directly and personally supported in 2019. “No we have no problem with each other or with the Argentine people. Rivalry with Argentina only in football”Affirmed the leader of the Brazilian extreme right.

// “We are not monkeys”: Anamá Ferreira’s fury against Alberto Fernández for his phrase about Brazilians

The controversy was unleashed by Fernández this Wednesday, when in a public act he wrongly attributed to the Mexican writer Octavio Paz a phrase about the origin of Argentines and Brazilians. “Octavio Paz once wrote that the Mexicans came out of the Indians, the Brazilians came out of the jungle, but we Argentines came from the ships,” said Fernández, erroneously paraphrasing the Mexican writer in words that more closely match a song by the Argentine musician. Litto Nebbia.

That statement generated a wave of criticism in Argentina itself and Alberto Fernández apologized through his profile on the Twitter network. “It was stated more than once that ‘Argentines descend from ships.’ In the first half of the 20th century, we received more than 5 million immigrants who lived with our native peoples. Our diversity is proud, “he wrote trying to explain his phrase. However, Fernández added: “I did not want to offend anyone, in any case, who has felt offended or made invisible, since now my apologies.”

The unfortunate sentence pronounced by Alberto Fernández about the origin of the Brazilian people caused great repercussions in Brazil, where they called it “racist”Your comments. Meanwhile, the local press linked this episode with the massacres of indigenous people during the Desert Campaign and the death of African descendants in the Paraguayan war.

Even the federal deputy Eduardo Bolsonaro, one of the sons of President Jair Bolsonaro, resorted to irony to affirm that “the ship that is sinking is that of Argentina”.

In a message on Twitter, the Bolsonarista legislator wrote: “The president of Argentina Alberto Fernández affirmed that while his people came from the ships of Europe, the ‘Brazilians came from the jungle.” ¿They will not say that it was RACIST against indigenous and African that formed Brazil? ”, he asked himself.

And he added: “However, I affirm: the ship that is sinking is that of Argentina.”

Bolsonaro’s son’s Twitter message is accompanied by a video of the Argentine president’s speech, translated into Portuguese, when he stated: “The Mexicans came out of the Indians, the brazilians came out of the jungle, but we Argentines arrived from the boats. They were ships that came from there, from Europe. And that’s how we build our society, ”said the president.