The lessons of the Cuban 11-J 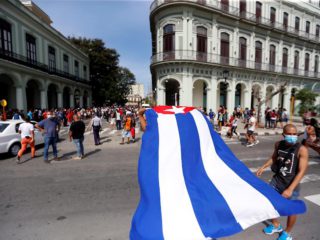 Havana, Sep 11 (EFE) .- Thousands of Cubans took to the streets to ask for freedom and better living conditions in the historic protests of July 11, which two months later leave lessons such as the need to openly confront plurality and establish dialogues with “difficult” sectors for the State.

The government’s response has been “to be expected” and “it has followed some of the courses it knows how to handle, opening some type of dialogue channel,” Cuban researcher Julio César Guanche told Efe.

However, the first challenge facing the executive chaired by Miguel Díaz-Canel “is to openly confront the Cuban plurality and establish dialogues with difficult sectors that are different from the government one.”

The other great challenge, key to this dialogue, according to the interviewee, is “to review the judicial and legal situation of the detainees, the summary trials and recognize the right to peaceful demonstration.”

According to the professor, not acting on it “would continue to be a big problem for the same possibility of dialogue that the Government is trying to develop.”

The protests, unprecedented in more than six decades, erupted two months ago due to food shortages, blackouts and the effects of the economic crisis aggravated this time by the pandemic and the resurgence of the US embargo.

These demonstrations, which included peaceful marches, clashes with the police and specific looting in some towns, were followed by a wave of arrests of hundreds of people critical of the government, from anonymous citizens to artists, opposition activists and independent journalists.

Among them, the well-known opponents José Daniel Ferrer and Luis Manuel Otero Alcántara stand out, who are still in prison, like the artist Hamlet Lavastida.