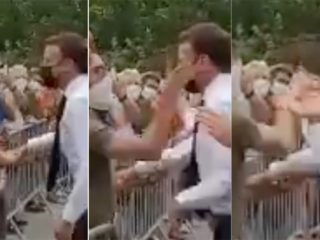 A French court has sentenced Damien Tarel, the man who slapped President Emmanuel Macron on Tuesday, to 18 months in prison, of which he will serve four in prison, Reuters reports.

The attack occurred when the French president approached to greet a group of citizens during a visit in the municipality of Tain-l’Hermitage, in the Drôme department, in southeastern France. The 28-year-old attacker was on the other side of a fence. When he was close to Macron, he grabbed his arm and attacked him chanting a monarchical slogan. Tarel is fond of medieval martial arts and follows far-right accounts on social media.

The condemned man has acknowledged the facts before the Valence court, but has assured that it was not a planned attack. “I acted instinctively,” he said. The Prosecutor’s Office has considered it, however, “a deliberate act of violence.” Arrested since Tuesday, Tarel has been accused of a crime of violence against a person who holds public authority, which carries a maximum penalty of three years in prison and a fine of up to 45,000 euros. In his favor, he has counted that he had no criminal record.

During the trial, according to the agency France Presse, Tarel has reported that he was with a friend waiting in the car, when he thought about attracting attention during the president’s visit by throwing him an egg or a cake with cream. “When I saw his kind and lying appearance, which caught me as a voter, I felt disgusted,” he added in court.

Described by his friends as shy and affable, Damien Tarel explained to the officers that he was sympathetic to the anti-government yellow vest movement and declared himself akin to the right or the extreme right, although “without belonging to any party.”

His friend Arthur C. was arrested at the same time on Tuesday for filming the attack, but has not been charged in the event for the incident.

When he slapped Macron, he was heard saying “Montjoie Saint-Denis, down the macronía”. “Montojoie Saint-Denis” is a rallying cry of far-right royalists in France.

The president, who continued with his official agenda, described the incident as an isolated incident and warned that violence and hatred are a threat to democracy. All parties condemned the attack.