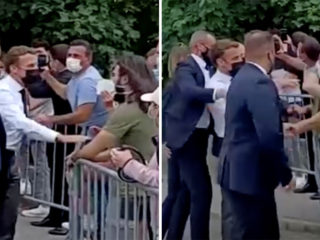 Damien Tarel, the man who slapped French President Emmanuel Macron on Tuesday, told a court that he considered the president to represent “the decline of the country,” according to BFM TV.

“I think a lot of people feel this injustice,” Tarel stressed. “I would not like to judge our democracy, but I think he [Macron] he was not elected by all French society, “he added.

In addition, the attacker shared that he had also considered throwing an egg or a cream pie, among other plans. “In the car, when we were waiting, we had thought to do something flashy, challenge him on political issues, grab a yellow vest or a French flag, but we changed our mind,” he added.

The man could face a sentence of up to three years in prison and a fine of 45,000 euros for his actions.

The 28-year-old unemployed man declared during questioning that he supported the yellow vest movement and had far-right political beliefs. Tarel was arrested along with another man from his hometown Saint-Vallier. Police found weapons, a copy of Adolf Hitler’s autobiographical manifesto, and a communist red flag at the home of the second individual. He will not face any charges related to the slap, but will be prosecuted for illegal possession of weapons in 2022.

For his part, Macron commented that this slap was an “isolated” incident perpetrated by “ultraviolent individuals.”

“We must not let isolated events, ultraviolent individuals take possession of the public debate, they do not deserve it,” said the president.