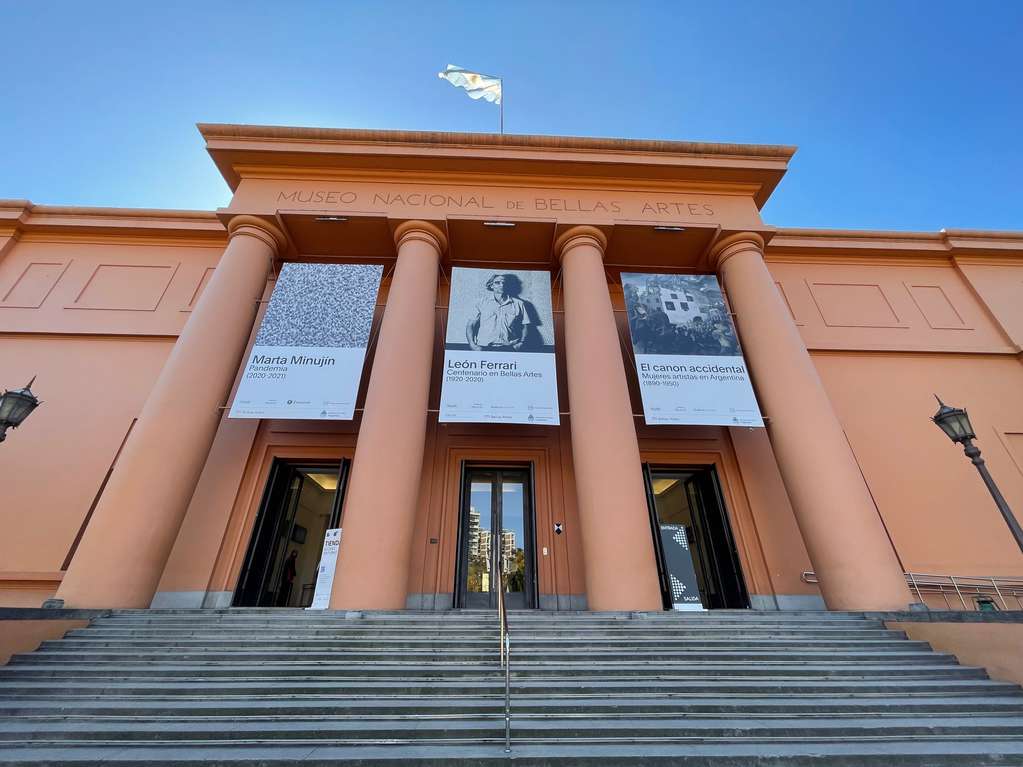 Is he most visited in Argentina and it is very beautiful. Since 1932, it has been housed in what were pumping stations and water tanks, at Avenida del Libertador 1473. There are more than 12,000 works, including paintings, engravings, drawings, sculptures, tapestries and other objects.

The permanent collection has works by Argentine artists such as Berni, Pettoruti and Quinquela Martín and international like Picasso, Goya, Monet, Manet, Renoir, Van Gogh, Rubens, Cézanne, El Greco y Rodin, It is currently exhibiting the exhibition “Nómada” by the Korean artist Kimssoja, which is presented for the first time in Buenos Aires.

It opens from Tuesday to Sunday from 1:00 p.m. to 7:00 p.m. with prior registration on the web. Entrance is free and open.

It is located in Defensa 1600, San Telmo, in the place where Pedro de Mendoza would have founded Buenos Aires. Through objects, pieces of art and historical documents, invites you to think and debate the history of the country. On display, among other historical jewels, the crooked saber of San Martín and the flag that in 1812 accompanied Manuel Belgrano in the battles of Upper Peru

Surely you once passed by majestic building in the block of Córdoba and Ayacucho streets called Palacio de las Aguas Corrientes.

Faced with the relentless advance of the epidemics at the end of the 19th century, the authorities decided to build a state-of-the-art running water network. The warehouse building, lavish and declared a National Historic Monument in 1989, it is lined with 300 thousand English majolica. Inside, there is an iron structure made in Belgium that used to hold millions of liters of water.

In addition to the architecture of the place, which mutes even the most traveled, there is a collection of toilets, art exhibitions and many ghost stories.

It opens from Monday to Friday from 10:00 a.m. to 5:00 p.m. Admission is free with prior registration at [email protected]

Painter, astrologer, inventor, musician, linguist … What was Alejandro Schulz Solari not? Intimate by Jorge Luis Borges, a man with a broad worldview, his work invites us to think about other worlds and other languages. All these languages ​​merge in Laprida 1212, Recoleta, where the museum inaugurated in 1993 is located with the works selected by the artist himself, his wife and his marchant. There is also the library that preserves more than 3000 volumes.

The fabulous Museum of Modern Art of Buenos Aires –opened in 2012- he has nothing to envy his peers in the world. It is located on Avenida San Juan 328, in San Telmo, in the so-called District of the Arts. The original building was built for the tobacco company Nobleza Piccardo. The samples are top notch; there are more than five at the moment. The cafeteria is beautiful.

It opens on Monday, Wednesday, Thursday and Friday from 11:00 to 19:00. Saturdays, Sundays and holidays from 11:00 to 20:00. General admission: $ 50 On Wednesdays, free. It is recommended to book an appointment on the museum’s website before the visit.

One of the best museums in the Shoa that I have known. It is an experiential space that integrates the history of the Holocaust and its repercussions in Argentina. It works at Viamonte 919, in what used to be one of the “palace” power plants of the old Italo Argentina company.

The tour, which accounts for the process of extermination of six million Jews at the hands of the Nazis, it is absolutely interactive. By downloading an app on the phone, the self-guided tour is carried out. It features advanced technology that allows for lifelike interaction with a Holocaust survivor. A visit as painful as it is necessary.

Admission is free with prior registration on the museum’s website. They carry out 360 degree virtual visits.

Located at Superí 2647, Coghlan, it is a space dedicated to human rights. It is the only institution in the region that has a museum and theater that seek preserve the memory of Anne Frank, a Jewish girl who along with her family sought refuge from Nazi persecution in Holland and was eventually deported to concentration camps. The only survivor was Otto, Anna’s father, who found his daughter’s diary and decided to make it known to the world.

The house in which the center operates was donated for this mission and in it there are permanent and itinerant exhibitions. The guides are volunteers from 15 to 25 years old.

Open on Thursdays, Fridays and Saturdays. It is necessary to reserve in advance through the web or to [email protected]

The Museum of Hispanic American Art Isaac Fernández Blanco is staying at the Palacio Noel, a beautiful mansion in Suipacha 1422, Retiro.

The house belonged to the Noels, founders of the first candy factory in Argentina. Martín, one of the sons, studied architecture and was recognized for a new style (Neoprehispanic) born from the combination of art deco and neo-colonial style with pre-Columbian elements.

The Museum combines pieces donated by Martín Noel and the Isaac Fernández Blanco Collection: silverware, imagery, paintings, ceramics, from the 16th to the 19th centuries. The place is magical and the patio falls in love.

It is a private art center dedicated to the diffusion of great artistic movements and the educational exchange that has the support of Techint. It is located on Avenida Pedro de Mendoza 1929 and Caminito, La Boca.

The building is beautiful and I suggest ending the visit with a coffee on the terrace that has some breathtaking views of the Riachuelo. Until November, La Suite is exhibited, a selection of works and artists belonging to the FRAC collections – Regional Funds of Contemporary Art of France.

It opens from Thursday to Sunday from 12.00 to 18.00. Prior reservation is required through the web. Admission is free.

A few blocks from there, inside the Bombonera, is the Museum of the Boquense Passion, first soccer themed space in Latin America.

I took a tour of the place, which displays cup triumphs and recalls in an interactive tour the history of the club, culminating with the view of the stadium from the grandstand. Much requested by foreignersIt is a different walk to do as a family, even if you are not from Boca.

| In 2019, I was given to traveling as if the world was ending. As if predicting what was going to happen. My little Spanish circuit covered Madrid –I hadn’t visited it for almost three decades-, Santiago de Compostela and part of the Spanish Basque country.

Buenos Aires underground The complex of The Zanjón de Granados in San Telmo it is a pearl of Buenos Aires. Under a large house from the early nineteenth century, later converted into a tenement, is the history of the city with its mysterious tunnels. The old Zanjón de Granados was a natural depression that drained the rainwater from the upper reaches of the city towards the Río de la Plata. The purchase of a large house from 1830 on Defensa street by businessman Jorge Eckstein ended up revealing by chance the past of the colonial drainage system

from the city of Buenos Aires. An impressive archaeological work reconstructs the heritage. The complex -which also includes the Minimal House- rescues cisterns, manholes and walls

19th century. The adventure of excavation, reconstruction and enhancement has been going on for more than two decades.

There are visits on Wednesday, Friday and Sunday. General admission $ 900. Retirees $ 700. Children under 10 years old: Free

Cash desk Leppage There is a hotel in Monserrat that combines art and history in an exquisite fusion. The archaeological finds of the old Buenos Aires are presented, found under its land. The story goes back to the 19th century when Buenos Aires began to be “designed”. The property belonged toFelicitas Guerrero’s husband

The Guerrero family built a shopping arcade -Pasaje Belgrano- with rental housing on the top floor. The building had an internal passage on which the stained glass windows of the premises were arranged, which connected Bolívar street with Belgrano avenue.

”, An institution founded by the state at the beginning of the 20th century to receive and guide immigrants arriving in Argentina. The building houses the Museum of Immigration, created in 1974, and the Center for Contemporary Art, inaugurated in 2012. There arehistorical documentation

, audiovisual material and the registry books of all immigrants who arrived in the country.

One week in El Calafate and El Chaltén

| He had not visited the Perito Moreno since 2000. He had the memory of its magnitude, by the way, although he needed to return to refresh it. It was worth the joy.

It currently has seven rooms exposed to the public, including the BIENALSUR exhibitions. During the visit, you can consult the passenger arrival database to find out your own origins. It opens from Tuesday to Sunday from 11:00 to 18:00. Admission is free and with limited places. Reservations are made through the Museum View MUNTREF mobile application or by email to [email protected] Valeria Schapira is a writer and creator of #ViajoSola.Instagram