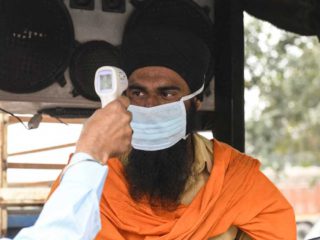 The new variant of Covid whose origin is in India, called B.1.617, was initially detected last month with two mutations: E484Q and L452R. Viruses mutate all the time, as part of evolutionary biology. Some mutations weaken them, while others can strengthen them, allowing them to proliferate faster or cause more infections. If the virus can use reinfection to spread, then it is “penetrating” potential herd immunity, said Dr. Jeremy Kamil, a virologist at the Louisiana State University Health Sciences Center in Shreveport. Herd immunity occurs when a large part of a community becomes immune to a disease through vaccination or the massive spread of it, he adds.

The spike protein is the part of the virus that it uses to invade human cells. The variant, like those first detected in the United Kingdom, South Africa and Brazil, also has differences in the genetic code of the virus, which is believed to make it more infectious. Last month, virologist Shahid Jameel said that a double mutation in key areas of the virus’ spike protein can increase the risks that it will become more infectious, potentially more deadly, and bypass the body’s immune response. Still, more research is needed to examine the role of mutations and the impact they could have.

The degree of mortality of the strain is one of the unknowns that researchers are still trying to figure out. The characteristics of the double mutant variant are under investigation, but the L452R mutation is well characterized in US studies. It increases viral transmission by about 20 percent and reduces the effectiveness of antibodies by more than 50 percent according to these reports.

This variant has been detected in at least 10 other countries, including the United States, United Kingdom, Australia and New Zealand, according to the situation report on outbreak.info. As of April 16, 408 sequences have been detected in the B.1.617 lineage, of which 265 were found in India. A UK government surveillance report revealed that it has found 77 cases in England and Scotland so far, and designated it as a ‘variant under investigation’.

The new strain, which has the so-called double mutation, is believed to be fueling India’s deadliest new wave of cases that has made it the second-worst-hit country in the world, again overtaking Brazil, and has already begun to overwhelm. its hospitals and crematoria.

The Indian government denies that the increase in cases is related to the mutations. “Although worrisome variants and a new double mutant variant have been found in India, they have not been detected in sufficient numbers to establish a direct relationship or explain the rapid increase in cases in some states,” the Ministry of Health said in a statement. .

The report comes after several experts have called on the government to step up genome sequencing efforts. “We have to constantly monitor and make sure that none of the worrisome variants is spreading in the population. Just because it doesn’t happen now doesn’t mean it won’t happen in the future. And we have to make sure we get the evidence early enough, ‘Dr Jameel told the BBC’s Soutik Biswas earlier this month.

India has currently licensed three vaccines. Two of them are already in use, while the third, Russia’s Sputnik V, was approved this week. India also accelerated the approval of other foreign vaccines this week. All of these efforts run the risk of being compromised if injections prove to be less effective against this double mutation variant.

More than 11.7 million cases and 160,000 deaths later, efforts continue to identify mutations and control the pandemic. The latest wave, which started this month, comes in what some experts have called a “delicate phase” for India: the healthcare system is already depleted from a year-long battle against COVID-19. Indian states have already started tightening restrictions, such as strict curfews and intermittent closings. Two large cities, Delhi and Mumbai, have also mandated random rapid tests at airports, train stations and busy areas such as shopping malls in order to locate and contain the new strain more effectively.