The new tourism: SpaceX travels to space for the first time with a civilian crew 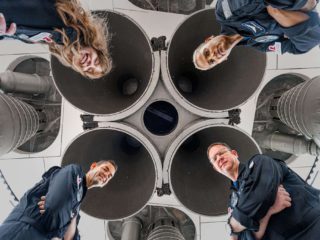 The spacial tourism will broaden its horizon this week thanks to first flight of SpaceX with a civil crew. Elon Musk’s company announced that the mission Inspiration 4 will be released on Thursday, September 15, no professional astronauts among the passengers. The adventure will last three days, in which the ship will orbit the Earth.

The SpaceX initiative joins similar actions already carried out by companies managed by other tycoons, Jeff Bezos and Richard Branson, which through the firms Blue Origin and Virgin Galactic, respectively, this year took “ordinary” people into space.

Inspiration 4 is a more ambitious program than its competitors, who experienced the weightlessness of space albeit for a few minutes. The SpaceX mission will travel in the Crew Dragon capsule taking off aboard Falcon 9, at launch pad 39A of the NASA Kennedy Center, from where the Apollo missions departed for the Moon.

Tourism in space: details of the adventure

When it reaches orbit, Crew Dragon will go around the world once every 90 minutes, moving at 27,360 kilometers per hour. The spacecraft is expected to reach an altitude of 575 kilometers, exceeding the distance of the International Space Station (from which we are separated by about 400 kilometers). By way of comparison, Virgin Galactic’s mission barely exceeded 80 kilometers in altitude.

SpaceX has already brought a dozen astronauts to the ISS in collaboration with NASA; Thursday’s flight will be the first time astronauts have traveled without professional training.

The flight will be controlled by Jared Isaacman (38), billionaire, founder of the payment company Shift4 Payment, and experienced pilot. “The risk exists,” said this man who will take command of the ship. “We will travel in a rocket at 28,000 kilometers per hour around the Earth, in that kind of environment there are risks,” he said.

“Throughout the history of mankind, less than 600 humans have reached space. We are proud that our flight helps to influence all those who travel after us ”, said with enthusiasm the businessman who from a young age showed interest in the space race.

Three people will accompany Isaacman, representing various values. Hope is represented by Hayley Arceneaux (29) who overcame childhood bone cancer and now works as a medical assistant at St. Jude Hospital in Memphis, specializing in pediatric cancer. She will be the first person with a prosthesis to travel to space.

Generosity is attributed to Chris Sembroski (42), a former US Air Force veteran who was in the Iraq war. He was selected after a donation to the aforementioned hospital, to which Isaacman will also give a significant sum of money.

Sian Proctor (51) represents prosperity in Inspiration 4. She is a science teacher and in 2009 she was a few steps away from becoming an official NASA astronaut, where her father participated in the Apollo missions.

While travelers are not professional astronauts, as noted, they have received intensive training for several months. They have carried out tests on a giant arm that rotates at high speed and allows us to experience centrifugal force, and they carried out parabolic flights to feel weightless. As reported by the American company, before and after the mission a study will be carried out to determine how this adventure impacts their bodies.

The crew will re-enter the atmosphere after 72 hours in space, depending on the Florida weather, and will land in the Atlantic Ocean. The SpaceX team will go to the capsule, load it onto a ship, pick up the crew and take it ashore.