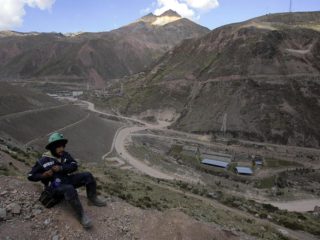 Lima, Sep 14 (EFE) .- The Newmont mining company reported that it will invest at least 500 million dollars until the end of 2022 in Peru to advance the Yanacocha Sulfuros project, while the uncertainty caused by the Covid-19 pandemic is resolved. 19.

The US company said, in a statement released by local media, that this investment will be used for preparatory activities such as detailed engineering, long-term acquisitions and earthworks.

He added that, given the uncertainty caused by the pandemic, he will make a decision on the total financing of the project, which will be developed in the northern region of Cajamarca, during the second half of 2022.

Meanwhile, he indicated, he will continue to work and dialogue with neighboring communities, local authorities and the government of President Pedro Castillo on issues such as the extension of the project’s financing schedule, the fight against the pandemic and possible regulatory and fiscal changes for the industry.

“This will provide greater clarity as you continue to invest in the project,” he said.

After knowing the announcement of the company, the Minister of Economy of Peru, Pedro Francke, highlighted that the investment in Yanacocha Sulfuros is one of the large-scale projects that will boost private investment in the country and that are considered in the projections of the Framework Multiannual Macroeconomic (MMM) 2022-2025.

“Both public and private investment is essential for the reactivation of the country’s economy,” he said before indicating that this project ratifies the projections and strengthens “the perspective of a sustained recovery of the” Peruvian economy.

“We are sure that this investment will continue according to forecasts and will be key to the growth of our economy in the coming years. This large-scale investment confirms investors’ confidence in the Peruvian economy, in its stability and solid macroeconomic fundamentals. “he added.

The Ministry of Economy and Finance (MEF) recalled that Yanacocha Sulfuros is a project with an investment of 2,100 million dollars that aims to allow the continuity of the operation in the Yanacocha open-pit gold mine.