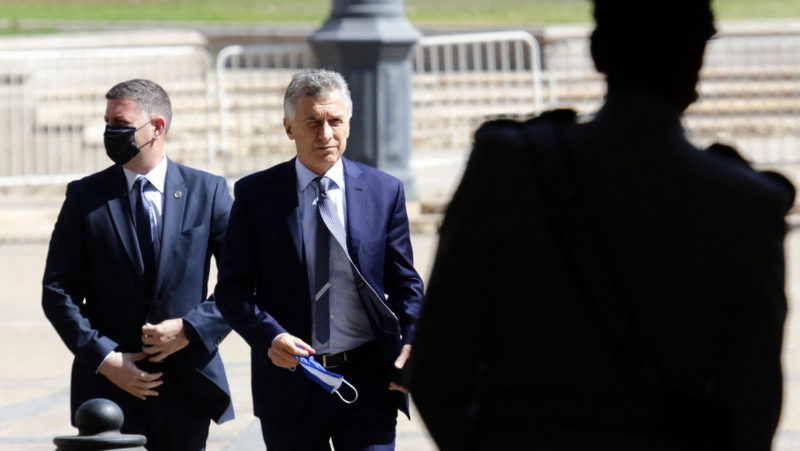 The legal cases against the former president of Argentina, Mauricio Macri, began to advance once he left power and now, after his first prosecution, he must face other investigations into arms trafficking to Bolivia, the bankruptcy of the Argentine Post Office and pressure on businessmen media opponents and judges and prosecutors.

The day before, Judge Martín Bava prosecuted the former president by accusing him of alleged espionage against the relatives of the 44 crew members of the ARA San Juan submarine that sank in November 2017. In addition, he imposed a fine of almost one million dollars and prohibited him from leaving the country.

From Chile, where he is on a tour to support the far-right candidate for the presidency, José Antonio Kast, Macri attributed the judicial decision to “revenge” and “political persecution” against him promoted by the government of President Alberto Fernández and Vice President Cristina Fernández de Kirchner.

It is the same answer that the former president has offered in the rest of the cases that are processed in different courts.

One of the most serious is the one that investigates the arms smuggling that took place to Bolivia in November 2019 during the coup d’état suffered by former President Evo Morales.

On July 8, Bolivian Foreign Minister Rogelio Mayta denounced that the Macri government sent weapons to Jeanine Áñez, who proclaimed herself president after the forced departure of Morales.

As evidence, he presented a letter in which the general of the Bolivian Air Force, Jorge Gonzalo Terceros Lara, who today is being processed for sedition, thanks the then Argentine ambassador, Normando Álvarez García, for sending “war material” consisting of 40,000 cartridges. , 18 tear gas and 71 gas grenades.

The letter is dated November 13, 2019, three days after the coup against Morales and when Áñez had already assumed office with the support of the Armed and Security Forces.

The government of @mauriciomacri provided underneath “war material” to the de facto regime of @JeanineAnez in 2019 to suppress social protest and consolidate himself in government by force. The massacres of #Draw and #Senkata they cannot remain in impunity. pic.twitter.com/8UnTodJVDK

Upon initiation of the case, it was discovered that the Argentine government sent more material without authorization, since in the end it included 70,000 anti-riot cartridges, 100 pepper gas and 661 gas grenades. There were also bulletproof vests, helmets, night visors, binoculars, machine guns, rifles, and metal detectors.

The figures between what was requested and authorized in Argentina and what was reported and delivered in Bolivia do not coincide. Neither did the versions of the former officials, who first denied any shipment of arms and then, given the evidence, insisted that they were to protect the Argentine Embassy in La Paz.

The prosecutor Claudio Navas has already charged Macri; the former Chief of Cabinet, Marcos Peña; and the former defense ministers, Oscar Aguad; Security, Patricia Bullrich and Foreign Relations, Jorge Faurie; and the former commander of the Gendarmerie, Gerardo Otero, among other former officials.

Judge Ariel Lijo is in charge of one of the most sensitive causes for Macri because it involves his family.

It is about the debt that the Macri Group has dragged for two decades for the payment of the canon of the Argentine Mail and that, if it culminates in an adverse judicial ruling, could imply a millionaire disaster to the family fortune and criminal charges against former officials of its Government , since the crimes of “fraudulent administration” and “negotiations incompatible with the public function” are investigated.

The case began in 1997, when former President Carlos Menem granted the Macri Group the postal service concession, which in 2001 went into default, which led to a complaint by then-President Fernando de la Rúa against the businessmen.

In 2003, the late former president Néstor Kirchner rescinded the concession and initiated a case to claim the entire debt, but the negotiation was completely paralyzed.

Only at the beginning of 2017, when Macri was already president, a journalistic investigation revealed that his then Communications Minister, Oscar Aguad, had negotiated the payment of this family debt with the State.

The agreement, which was secretly signed in June 2016, just six months after Macri took office as president, allowed the company to pay around $ 37 million for the debt, but when investigating the case, the prosecutor Gabriela Boquín considered that this figure actually represented a remission, since it implied a reduction of 98.8% of the original debt given the elapsed time (16 years).

A technical analysis ordered by the prosecutor concluded that, in updated values, the real debt was equivalent to 4,277 million pesos (about 285 million dollars of that year) and grew to 70,000 million pesos because that would be the amount in 2033, period in which, according to the agreement signed by the Macrista government, the last agreed installment would be paid.

The scandal forced Macri to suspend the agreement, but the payment of the debt remained unsolved. In 2020, when he had already left power, the justice system intervened Correo Argentino and Legal experts verified that the agreement reached in 2016 had been an attempt to harm the State and they concluded that the Macri family owed 5,000 million pesos (about 50 million dollars at the current official price).

The company offered to cover 1,110 million pesos, that is, one fifth, in a single payment, which was rejected by Carlos Zannini, who, as Treasury Attorney, represents the State.

Last July, the Macri Group suffered a severe setback when Judge Marta Cirulli declared the Argentine Mail bankrupt, but a week later reversed the measure in response to an appeal from the company. The political tension generated by the cause is permanent.

Entrepreneurs Cristóbal López and Fabián de Sousa, owners of the Indalo Group, denounced that Macri besieged, pressured and extorted them into selling their media and other companies to friends of the former president.

According to your accusation, the refusal to give in to the demands of macrismo cost them jail, since both businessmen were arrested for an alleged multimillion-dollar tax evasion that led to the bankruptcy of the Oil Combustibles firm, which was lifted once they were released in October 2019.

In addition, it has been proven that López and De Sousa were spied on while they were in prison, and that their friends, lawyers and relatives were also victims of illegal wiretapping because they were not authorized by any judge.

For this reason, Judge María Servini de Cubría has already requested the international capture of Fabián Rodríguez Simón, one of Macri’s main legal advisers and who is a fugitive.

The rest of the defendants are the former president, his former adviser José Torello, the former head of the Federal Public Revenue Agency, Alberto Abad and the businessman Nicolás Caputo.

Macri is also accused in the so-called “case of the judicial table”, through which Judge María Eugenia Capuchetti investigates the alleged pressure that she exerted during her government, along with several former officials and advisers, against judges and prosecutors.

Judge Ana Figueroa, for example, has denounced that she was pressured to pass judgment in a process that affected the past government of Fernández de Kirchner. In the same sense, Judge Alejo Ramos Padilla suffered constraints in an investigation for illegal espionage, while former attorney Alejandra Gils Carbó detailed the harassment suffered by the macrismo that culminated in his resignation from office.