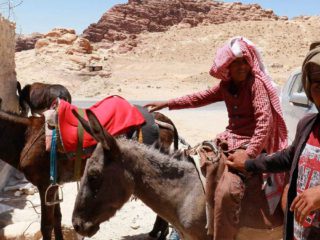 The herds of donkeys carrying hordes of tourists down the rocky roads of the Jordanian city of Petra they have been left out of work and on the brink of hunger due to the pandemic, which deprives locals of income. In front of the veterinary clinic near this city of sandstone with shades that go from pink to red, Abdel Rahman Ali, a 15-year-old donkey waits for his batch of free fodder to feed the animal.

“Before the coronavirus, we all had jobs. Petra Bedouins made their living and fed the animals. Now we have to come to this clinic to receive free food and care for them », laments the boy, wearing a blue shirt and green pants.

In 2019 the city received more than a million visitors for the first time. But the following year the pandemic caused the number of tourists who admired the beauty of this place included in the Unesco world heritage to drop drastically.

The troglodyte city, where they have carved many buildings in the rock, It was closed from March 2020 to May 2021. Now it only receives between 150 and 200 tourists a day, compared to 3,000 in 2019, the head of the Petra regional authority, Suleiman Al Farajat, explains to AFP.

According to him, in addition to the 200 guides from Petra, some 4,000 people benefited from the transport of tourists, riding the 700 to 800 horses, camels, mules and donkeys that roamed the city. “80% of the 35,000 inhabitants of the region depended directly or indirectly on tourism. With the pandemic, animal owners have been affected, but also hotels, restaurants, souvenir shops … Hundreds of workers have lost their jobs. the Mint.

«On good days I earned between 100 and 200 dinars (140 to 280 dollars, between 115 and 229 euros) and less than 20 dinars in the bad, which was barely enough to buy barley for my donkey “, says Abdel Rahman, who covers the needs of his mother and his two little brothers. “With the end of tourism, no one can buy fodder or medicine anymore. Whoever has a little money spends it on food, “adds the teenager.

In front of the iron door of the clinic, created by the US NGO “PETA” in the town of Um Sayhun, 23-year-old Mohamad al Badul also waits to fill his plastic bag with fodder. «My family and I had seven donkeys. We had to sell them for lack of income. Now we only have one and I can barely feed it», He explains bitterly.

The establishment, open in january 2020, feed and care for animals in poor health. Every day they receive between 10 and 15. “People here depend on their animals and with the stop of tourism, they can no longer take care of them,” says Hasan Shata, the Egyptian veterinarian who runs the clinic, the only open and free clinic in around Petra. “About eight months ago we began to see many cases of malnutrition, donkeys and very thin horses,” he says.

“We provide care and food. So we could save 250 animals because their owners no longer had the financial capacity to feed or take care of them, “says the doctor.

Everyone These equines will stop taking care of the transport of tourists in the Nabatean city. Farajat plans to replace animals with electric cars. “We hope to start July 1 with 20 vehicles driven by animal owners,” he says. “They will be employed by the authority that will pay them a salary that will be deducted from the tickets,” he said.

Entry to the site costs 50 Jordanian dinars, of which eight will fund salaries. “Going to the electric car will have – he says – at least two advantages: the site will be cleaner and it will end the criticism of the mistreatment of animals.”