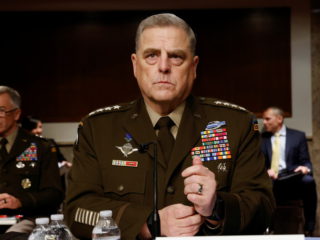 The Pentagon’s highest-ranking officer he claimed this Thursday that Russia and China represent the “biggest threats” for the US, a day after President Joe Biden claimed that his country’s military leaders informed him that climate change was in the first place.

During a congressional hearing, General Mark Milley, Chairman of the Joint Chiefs of Staff, responded to a senator’s question about his opinion regarding the president’s recent statements, made during his visit to the United Kingdom.

Addressing US troops on a British base last Wednesday, Biden recalled an old discussion he had with senior Pentagon officials. “This is not a joke. Do you know what the biggest threat the United States faces is, according to the chiefs of staff? Global warming, “said the president.

However, he clarified that said conversation took place shortly after he became vice president during the Barack Obama administration, which means that at that time there were different military commands.

In any case, Biden’s pronouncement unleashed a series of questions, joined by former President Donald Trump. “Biden just said that the Joint Chiefs of Staff told him that climate change is our biggest threat. If that’s the case, and they really said this, he should immediately fire them as incompetent,” Trump lashed out.

Despite downplaying climate change, General Milley acknowledged that this problem is still a “threat” and that it could even have a “significant impact on military operations.”