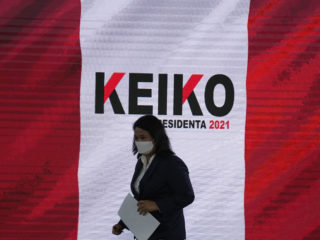 The prosecutor in the Lava Jato case, José Domingo Pérez, who in March accused the conservative candidate Keiko Fujimori of money laundering, criminal organization and obstruction of justice, has asked the judge this Thursday to place the Fujimori leader in preventive detention. for violating one of the probation rules of conduct. The candidate communicated with one of the witnesses of the process, which was prohibited, when presenting him as a lawyer and political spokesman for the Popular Force party in an appearance before the press this Wednesday to report on the requests for the nullity of thousands of votes from her adversary in the presidential elections, the rural teacher Pedro Castillo. The leftist candidate has an advantage of 72,455 votes with 99.1% of the official vote, but the challenges presented by Fujimori prevent his proclamation as the winner of the elections.

“It has been determined again that the defendant Fujimori Higuchi breaches the restriction of not communicating with witnesses; Well, it has been noted as a public and well-known fact that he is communicating with the witness Miguel Torres Morales ”, the prosecutor’s text maintains. He has requested 30 years in prison for Fujimori for having allegedly received 1.2 million dollars from the Brazilian transnational Odebrecht in his electoral campaigns for the presidency in 2011 and 2016. The candidate did not declare those amounts of money to the electoral authority and the used by evading the regulations of the financial system.

The judicial process against the candidate is currently in the phase prior to the oral trial, called accusation control. If Fujimori won the elections, she would obtain immunity while she was in the presidency, but the process would continue its course with some thirty co-defendants, including her husband Mark Vito Vilanella, her lawyer Giuliana Loza, and two of her former top political advisers. The eldest daughter of the autocrat Alberto Fujimori was already in preventive prison between 2018 and 2019 – she entered and left prison twice – because the prosecutor demonstrated that the current co-defendants agreed on the versions that the witnesses had to give, or the they intimidated to prevent them from declaring the truth and thus obstructing the investigations of the Public Ministry.

When the pandemic began, the preparatory investigation judge Víctor Zúñiga accepted that Fujimori would leave prison and go to probation with some rules, such as the prohibition to communicate with co-defendants and witnesses, not to change address without judicial authorization, or to travel with prior permission. judicial.

In the electoral results, the ex-Fujimori congresswoman not only plays the possibility of freezing a judicial process against her, but other fiscal investigations and trials against several of her family members.

The candidate’s father faces a recent prosecution for the deaths and serious injuries of more than 1,300 victims of forced sterilization during his second government (1995-2000). In a few weeks, a judge will decide whether to open the oral trial against the former president and three former health ministers of his government, one of whom has been elected as a congressman by Fuerza Popular.

In addition, since 2018 the start of the oral trial against the autocrat for the so-called Pativilca case, the murder of six peasants in January 1992 at the hands of the Colina military detachment, created by the Fujimori government and which committed murders and forced disappearances against opponents and civilians during his first government.

Keiko Fujimori’s younger brother, Kenji, also faces a judicial process for embezzlement, collusion, incompatible negotiation and improper use of the position for acts committed when he was a congressman in the first year of the government of President Pedro Pablo Kuczynski, in 2016. He The former president’s favorite son negotiated with Kuczynski his father’s pardon, in exchange for the approval, by the Ministry of Economy, of infrastructure projects promoted by congressmen from his party. One of those congressmen surreptitiously filmed the videos conditioning the ministers to approve said works.

Kenji, along with his brothers Hiro and Sachi, are also under investigation for money laundering because the police found a cache of cocaine in the warehouse of one of their logistics companies.