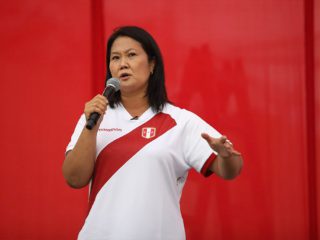 The prosecutor of the special team ‘Lava Jato’, Jose Domingo Perez, has requested this Thursday the preventive detention of the Peruvian presidential candidate Keiko Fujimori, considering that he would have violated the terms of your probation, in the framework of the investigation against him for an alleged crime of money laundering.

Pérez explained that Keiko Fujimori has violated one of the restrictions imposed on him in exchange for being released from prison at the beginning of May 2020, that of not communicating with other witnesses in the case for which he is accused of having received illegal financing from through the construction company Odebrecht for its presidential campaigns in 2011 and 2016.

“It has been determined again that the defendant Fujimori Higuchi breaches the restriction of not communicating with witnesses; Well, it has been noted as a public and notorious fact that he is communicating with the witness Miguel Torres Morales ”, it can be read in the brief presented by Pérez to the judge in the case, Víctor Zúñiga Urday.

In the same document, Pérez offers an image of the public meeting held this Wednesday between Fujimori and Torres Morales, in which the conservative leader announced legal actions before the National Elections Jury (JNE) and in which he would act as a lawyer for Fuerza Popular .

Precisely, the Popular Force candidate for the Presidency of Peru, Keiko Fujimori, has presented this Thursday nullity actions in 802 polling stations in which her formation has found “irregularities”, which represent about 200,000 votes, which the applicant expects ” be removed from the final count. ‘ The president of the National Jury of Elections (JNE) of Peru, Jorge Salas, has called “extraordinary” the annulment actions presented by the presidential candidate Fujimori.

Fujimori has appeared accompanied by two lawyers to report the presentation of these actions to the National Elections Jury (JNE), which would have to admit them for these votes to be annulled, as the candidate trusts, while Castillo continues to lead with 99 per cent scrutinized.

“Additionally, we are monitoring the challenge process, which are 1,200 minutes that we hope will later be counted in the final count of the JNE,” he said.