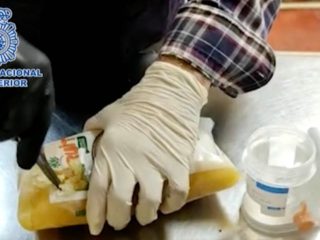 The National Police have seized in Robledo de Chavela (Madrid) 800 kilos of cocaine hidden in a consignment of 14,400 kilos of frozen pineapple from Brazil in an operation in which two businessmen who have been importing fruits and other products have been arrested since South America.

The drug had been hidden in frozen pineapple pulps after undergoing a complex chemical process that made it practically undetectable in customs controls, report the General Directorate of the Police and the Tax Agency, which has also participated in the operation.

Its final destination was a clandestine laboratory located in a chalet in the Madrid town of Robledo de Chavela, where the agents intervened drugs and carried out the arrests.

The investigations began in 2018 when, through international collaboration channels, an operation between the National Police of Colombia and the United States Customs Service became known, which culminated in the intervention in the Colombian city of Cartagena de Indias of 216 kilos of cocaine hidden in coffee to be transported to Spain in a container.

During the investigation, it was found that the way of acting of those responsible for the shipment consisted of using a business network dedicated to the import and commercialization of juices, beverages, coffee and fruits with the appearance of legality to transport the drug in maritime containers from different South American countries. .

In this way, the researchers focused their attention on a maritime container arrived in Valencia and imported by one of the investigated companies, in which 14,400 kilos of pineapple pulps destined for Spain were transported.

Once the inspection was carried out by the agents of the National Police and Customs Surveillance, twenty pallets of frozen pineapple were intervened, one of which was transporting the cocaine mixed with the fruit, which was transported to the aforementioned laboratory in Robledo de Chavela. .

The agents carried out three house searches and proceeded to arrest the two businessmen as allegedly responsible for this shipment, from whom they seized 10,000 euros in cash and two vehicles that they had recently acquired.