Home
World
The Pope: “Carnal sins are not the worst” | International

The Pope: “Carnal sins are not the worst” | International 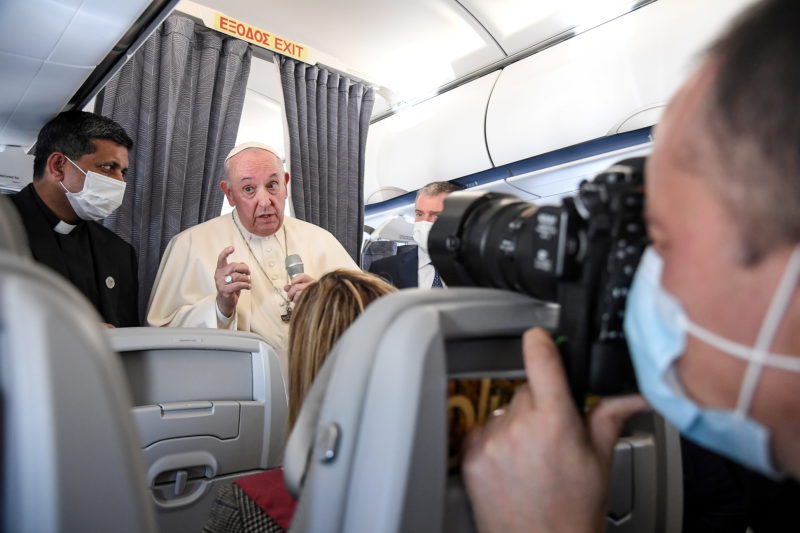 Pope Francis returned Monday morning from his trip to Cyprus and Greece, where he returned five years later to the island of Lesbos to discover that little had changed since then. The Pontiff again referred to the migratory drama in the traditional press conference that he offers on the plane. Francisco, as he did during all his stops on the trip, also attacked the European Union (EU) for its lack of commitment on central issues such as reception or the attempt to standardize and dilute the existing differences between countries. But he also surprised, commenting on the details of the sudden resignation last Thursday of the Archbishop of Paris, Michel Aupetit, of whom he revealed that he had practiced “little massages and caresses” on his secretary. Even so, the Pope pointed out that there may be worse matters: “The sins of the flesh are not the gravest.”

The same issue also led the questions to the report that has prepared an independent commission created by the French Episcopal Conference on sexual abuse committed for seven decades. The investigation numbers some 300,000 cases and forced the French Church to admit that they had “a systemic nature” and that a “cruel indifference” was maintained before the events. Asked about the implications that the monumental inventory of sexual misdeeds by the French clergy could have for the universal Church, the Pope replied that he has not read it and that he will receive the French bishops in the coming weeks for more information.

The Pope, on the other hand, as he has done on other occasions, surprised by asking that part of those facts and, in general, all the abuses and their cover-ups, be judged from the perspective of that time. “When doing these studies, you have to be attentive to the interpretations made over such a long time span. There is a risk of confusing how to deal with a problem 70 years earlier. A historical situation must be interpreted with the hermeneutics of the time, not with ours. Slavery, for example, the abuses of 100 years ago, seem brutal to us. The world was another, there was another hermeneutic. In the case of the Church, it was covered up … It was something that happened in families and neighborhoods. Today we say that it does not work. But you have to interpret with the hermeneutics of each era ”, he pointed out.

The Pope’s theory is not the result of an impromptu response at an aerial press conference. It has been repeated other times and it tends to make the victims enormously uncomfortable, who do not find any possible historical perspective to interpret the rape of a minor or the fact that the ecclesial leadership covered up the criminals who did it. Or even worse, that they keep doing it. Even if the theory were accepted, they consider, it is not a perspective of centuries, but of very few decades.

The inclusive Christmas of the European Union

The Pope, following the topics of other questions, criticized the European Union’s suggestion to eliminate the word Christmas in the holiday greetings in order to seek a more inclusive language with other traditions or religions. The issue has drawn strong criticism from the Italian far right. Francisco does not share that attempt at change either. “It is an anachronism. Many dictatorships have tried to do so. Think of Napoleon. It is a fashion of that secularism of distilled water. It never worked during the story. But it makes me think a necessary thing about the European Union. You have to take the ideals of greatness of the founding fathers, and be careful not to play the game of ideological colonizations. That could make her fall. The EU must respect the structure of each country and not want to make us uniform ”.

During his trip, Francisco also spoke of an incipient decline in democracy in some countries, “not only in Europe.” A claim he developed during the return flight. First, he said, we must be vigilant in the face of the advance of populisms. But in the same vein as what he had already said about inclusive language, he insisted on the idea of ​​maintaining one’s own identity. “Democracy is weakened when national values ​​are sacrificed, or diluted, towards a kind of empire or a supranational government. And that should make us think. The dictatorship of us and not the others, we must avoid diluting our own identity. […] This also happens when a superpower dictates cultural, political or economic behavior to other countries ”.