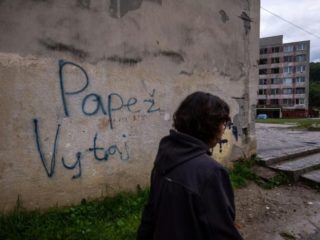 Pope Francis will meet members of the Roma minority, which has about 400,000 members in Slovakia, on Tuesday during his visit to the run-down Lunik IX neighborhood in Kosice, in the east of the country.

Almost 4,500 inhabitants coexist in this neighborhood, crammed into a space destined to house half of them.

Many buildings do not have electricity, heat, gas or running water because their supply was cut off due to non-payment of bills.

“It is formidable that the Holy Father comes to a place where no one wants to go,” said Peter Besenyei, leader of the local Salesian community and pastoral officer for the Roma in the Archdiocese of Kosice.

“It is difficult to find teachers in Lunik IX, priests who are willing to work, and the pope comes to this difficult environment,” he told AFP.

In the weeks leading up to the visit, city authorities cleaned up the neighborhood and repaired the road leading to it.

For Rudolf Mosorov, a 66-year-old resident of Lunik IX, the pope’s visit is a “miracle.” “It will bring us the blessing of God,” he celebrated.

Almost 20% of Roma in Slovakia live in extreme poverty, in more than 600 slums, especially in the south and east of this eurozone country of 5.4 million inhabitants.

Eastern Slovakia is one of the areas with the lowest GDP per capita in the European Union.