The PP-A sinks an absent PSOE: “Now that the money is not used in brothels, they do not want to hear it” 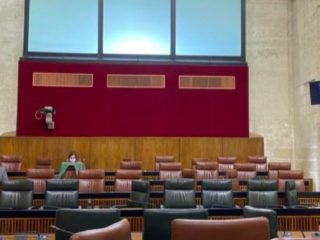 The PP Andaluz (PP-A) has sunk this Thursday PSOE of Andalusia (PSOE-A) by showing his bench in Parliament practically empty when debating employment matters. “Before the money of the unemployed ended up in brothels, now that it is used well, they don’t even want to listen to it”, has pointed out the training in social networks.

This is the PSOE bench when it comes to Employment in the Andalusian Parliament.

Before the money of the unemployed ended up in brothels, now that it is used well, they do not even want to listen to it. pic.twitter.com/8DUDzrroPw

It should be remembered, in this sense, that the change in Andalusia has led the community to be one of the strongest both in the financial plan as in the labor. This is what emerges from the latest study of the BBVA Research, which foresees that Andalusia will grow 5.4% in 2021 and 7% in 2022, and that in this period almost 180,000 jobs will be created, precisely those that, according to the Bank of Spain, have prevented them from being generated by the rise in the Minimum Interprofessional Salary (SMI).

The catalysts for this great future performance in Andalusia, according to the BBVA Researchare the advancement of vaccination, a favorable international environment, the greater dynamism of the consumption of Andalusian households and the boost that European funds will allow Next Generation EU (NGEU).

If these forecasts are met, “the Andalusian economy would create 177,000 new jobs in the 2020-2022 period,” as announced by the chief economist for Spain at BBVA Research, Miguel Cardoso, at the press conference to present the latest report ‘Andalusia situation’.

In any case, BBVA has warned that “The uncertainty is high”, in particular with regard to the vaccination process, the evolution of the pandemic and the distribution of European funds, something that “could condition the speed of recovery.”

According to the aforementioned report, Andalusia’s GDP «fell by 11% in 2020», which represents an impact of the crisis on the economy in line with the estimate for the Spanish economy as a whole (-10.8%).

According BBVA, various factors would explain the relative behavior of the Andalusian economy in 2020. Specifically, Cardoso explained that the final impact on Andalusian demand it was “more marked by the greater weight of the sectors of social consumption and tourism.”