The price of electricity beats its historical record in Spain 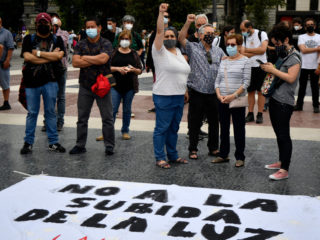 The dramatic rise in the price of electricity in Spain is going to mark this Wednesday, July 21, its all-time high since there are records. At nine o’clock at night on this day, the price of the megawatt per hour will reach 110,66 euros.

These levels, which had not been seen in recent decades, have made Spain the country of the European Union (EU) in which more has the price of electricity increased. According to Eurostat data corresponding to the month of June, electricity in the country was 37.1% more expensive than in the same month last year.

To ease the pocket of the Spanish, the Government has implemented this month a tax cut which reduces the VAT on the electricity bill 21 to 10% for those consumers with a contracted power of 10 kilowatts or less, provided that the wholesale price exceeds 45 euros per megawatt.

However, the measure is still a temporary tool, a “patch”, as critics have described it, and it is expected that the cabinet of President Pedro Sánchez will study structural measures to alleviate this energy crisis.

Problems in price formation and gas in the spotlight

The electricity bill in Spain has several problems. One of the main ones is the way in which the price of energy is formed: everything is paid at the price of the last one that enters the market, which is always the most expensive, gas. In this way, energies such as hydroelectric or nuclear, which are much cheaper, are being overpaid by receiving the same price as gas, which has associated costs, such as tolls for the emission of CO2.

This is how the expert in the energy sector and director of Próxima Energía, Jorge Morales de Labra, tells MRT: “More than 80% of energy production has nothing to do with natural gas or CO2. using this excuse to inflate the income that other types of plants are receivingsuch as nuclear, hydroelectric, solar, etc., which account for around 80% of the country’s production, “he says.

Experts predict that these high prices will remain for quite some time because the price of gas will continue to be expensive internationally because there are many countries that are currently in substituting gas for coal. In addition, the decline in prices is expected to occur very gradually as the construction of renewable energy infrastructures progresses.

According data Red Cross, nine out of 100 people in Spain they cannot have their home at the right temperature. Energy poverty mainly affects women (68%) and has a high incidence in households with children under 16 years of age (48.9%).

However, on the other side of the scale are the huge benefits harvested by companies that are part of the energy oligopoly Spanish. Today it is known that Iberdrola has earned around 1,300 million euros net in the first quarter of the year.