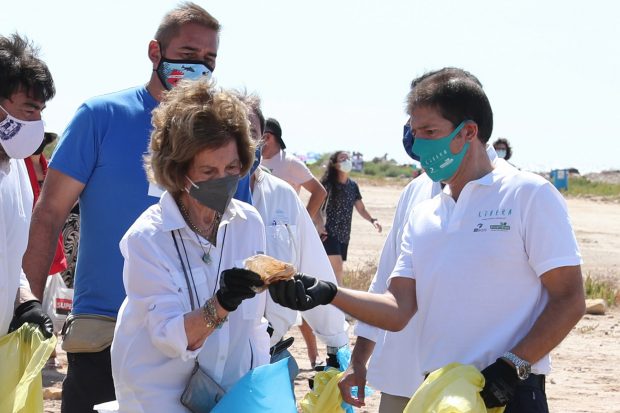 The Reina Sofía, one more volunteer in the garbage collection on the beaches of Alicante

The Queen Sofia she has become one more volunteer this weekend. Felipe VI’s mother did not want to miss the opportunity to participate in the Libera Project campaign ‘1m2 for the beaches and the seas’. An initiative that has been carried out to commemorate the International Beach Cleaning Day.

The Queen Sofía has moved to the Almadraba beach in Alicante, where she has collected ‘trash beauty’, the term that refers to the garbage that man generates and leaves in natural spaces. He has done so as a representative of the Reina Sofía Foundation, which participates in this initiative promoted by SEO / Birdlife in collaboration with Ecoembes.

In addition to collecting waste, Doña Sofía has been able to see first-hand the work of the divers of the Marine Watch Network who clean the seabed and the Red Cross volunteers. Felipe VI’s mother has also learned the keys to identify the type of waste that is collected through a mobile phone application whose data is integrated into the database of the Ministry for the Ecological Transition and the Demographic Challenge and will be collected in the Barometer Trash.

Along with Doña Sofía, some authorities have been seen, such as Federico García, head of the SEO / BirdLife Social Area; Óscar Martín, CEO of Ecoembes; Luis Barcala, mayor of Alicante; Julio César Marcos, representative of the Marine Watch Network; and Francisco Galván, provincial president of the Alicante Red Cross.

It is not the first time that we see Felipe VI’s mother collaborating in cleaning the beaches, but she has already participated in this campaign on other occasions. Queen Sofía is a great defender of caring for the environment and ecology, which is why she is often involved in different initiatives that are related to the fight against climate change and the care of flora and fauna. Initiatives, all of them, that he carries out through the foundation that bears his name.

The work “Spring 2020. Tribute to the elderly”, by José Manuel Martínez Pérez, receives the 56th Reina Sofía Prize for Painting and Sculpture by @AEPEMadrid. After the delivery, the Queen Sofía has toured the exhibition of the finalist works of this edition.
➡️https://t.co/ELo5Lhir1h pic.twitter.com/FjX9N74ENR

After enjoying the summer holidays in Palma de Mallorca, Reina Sofía has already returned to her institutional activity. Last week he presided over the award ceremony of the Reina Sofía Prize for Painting and Sculpture and this week he is scheduled to participate in the inauguration of the VIII International Congress on Research and Innovation in Neurodegenerative Diseases.